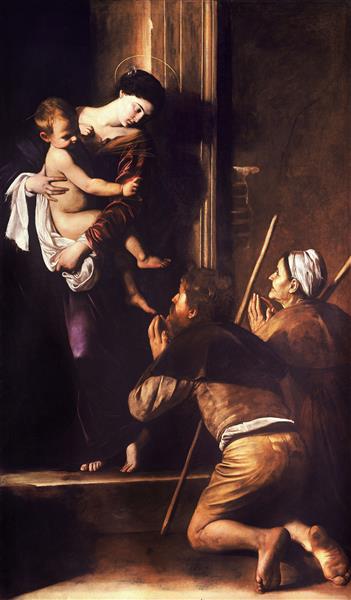 The Madonna of Loretto or Pilgrim's Madonna is a famous painting (1604–1606) by the Italian Baroque master Caravaggio, located in the Cavalletti Chapel of the church of Sant'Agostino, near the Piazza Navona in Rome. It depicts the apparition of the barefoot Virgin and naked child to two peasants on a pilgrimage; or as some say it is the quickening of the iconic statue of the Virgin.

In 1603 the heirs of marquis Ermete Cavalletti, who had died on 21 July 1602, commissioned for the decoration of a family chapel a painting on the theme of the Madonna of Loreto. Putting into practice the marquis's will, the Cavaletti's on 4 September 1603 purchased a chapel in the church of Sant'Agostino in Rome.

Giovanni Baglione, a competing painter of lesser talent, but who had successfully obtained Caravaggio's jailing during a libel trial, said that the unveiling of this painting "caused the common people to make a great cackle (schiamazzo) over it". The uproar was not surprising. The Virgin Mary, like her admiring pilgrims, is barefoot. The doorway or niche is not an exalted cumulus or bevy of putti, but a partly decrepit wall of flaking brick is visible. Only the merest halo sanctifies her and the baby. While beautiful, the Virgin Mary could be any woman, emerging from the night shadows. Like many of Caravaggio's Roman paintings, such as the Conversion on the Way to Damascus or the Calling of St Matthew, the scene is a moment where everyday common man (or woman) encounters the divine, whose appearance is also not unlike that of a common man (or woman). The woman modelling Mary appears to be the same as that in the canvas in the Galleria Borghese: The Madonna and Child with St. Anne (Dei Palafrenieri) (1605).

It has been suggested that Caravaggio's composition is at least in part derived from a detail of a 1574 engraving, Adoration of the Magi, after Rosso Fiorentino, by Caravaggio's friend Cherubino Alberti (1553-1615).