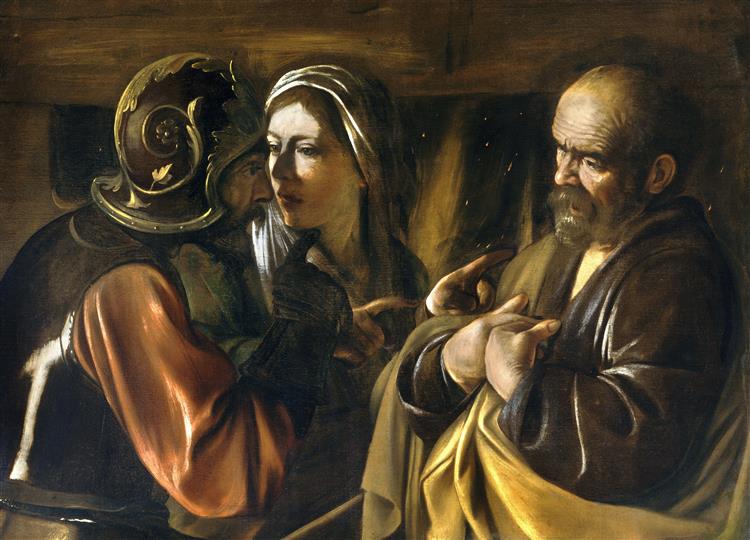 The Denial of Saint Peter (La Negazione di Pietro) is a painting finished around 1610 by the Italian painter Caravaggio. It depicts Peter denying Jesus after Jesus was arrested. The painting is housed in the Metropolitan Museum of Art in New York City.

The Denial of Saint Peter is generally thought to be one of the last two works by Caravaggio, the other being The Martyrdom of Saint Ursula. It was probably finished at Naples in the summer of 1610. This dating is made on stylistic and compositional grounds, especially by comparison to the Saint Ursula.

In 1612, the painter Guido Reni left Rome for his native Bologna and on 8 March 1612 gave instructions to the engraver Luca Ciamberlano to collect the remainder of his fees from Reverenda Camera Apostolica for the frescos he had painted in the Borghese Chapel in the Basilica di Santa Maria Maggiore. Ciamberlano again acted on his behalf on 12 September 1612 in the collection of some other debts. The combined sum owed to Reni amounted to 350 scudi. It seems that Ciamberlano was late in the forwarding of this money, for on 3 May 1613 Reni appointed Alessandro Albini to collect. Summoned before the notary Simon Petrus Corallus, Ciamberlano offered "a painting by the hand of the late master Michelangelo da Caravaggio, which they say portrays the denial of St Peter with a maid." It was valued highly at 240 scudi and accepted by Albini in payment. The balance, 110 scudi, was paid over the next seven years.

A number of artists active in Rome about this time must have known of the painting. Its influence is to be seen in a work by José de Ribera, now in the Galleria Corsini, Rome, dated to ca. 1613–15. Lionello Spada also completed at least two autograph works based on the painting, one in a private collection, the other in the Galleria Nazionale, Parma. Spada returned to Bologna from Rome and Malta in 1614.

Reni must have disposed of the painting some time within the next decade since it appears in Cardinal Paolo Savelli's inventory taken at the Ariccia palace in 1624. Savelli was a patron of Orazio Gentileschi, a contemporary of Caravaggio in Rome, of whom he owned at least twelve paintings.

The cardinal died in 1632, leaving it to his brother, Federico Savelli (died 1649), who in his turn left it to his nephew Cardinal Fabrizio Savelli. In 1650 the Savelli collection was offered for sale to the Duke of Modena and the picture must have been sold soon thereafter.

In 1798, Matthew Pilkington noted a painting in the Certosa di San Martino in Naples "by Caravaggio, representing the Denial of St. Peter, with figures at half-length and as large as life". A document of 28 September 1655 states it was sold to the Certosa by architect Cosimo Fanzago and was hung above the door to the sacristy. Bernardo de' Dominici described this painting in the third volume of his Vite dei Pittori, Scultori, ed Architetti Napolitani (1742) as "a miracle of art, executed with such power of truth that it triumphs over whatever work is near it". Battistello Caracciolo had made a copy of this painting, now lost. It is not known whether this painting is the same as the present; some time after Bernardo de' Dominici remarked on it, it was removed and presumably sold. Giovanni Pietro Bellori (1672) wrote "it depicts the serving maid pointing to Peter, who turns with open hands in the act of denying Christ; and it is painted in nocturnal light with other figures warming themselves at a fire ". Thus there appears to be a second version of Caravaggio's Denial of St Peter unaccounted for.