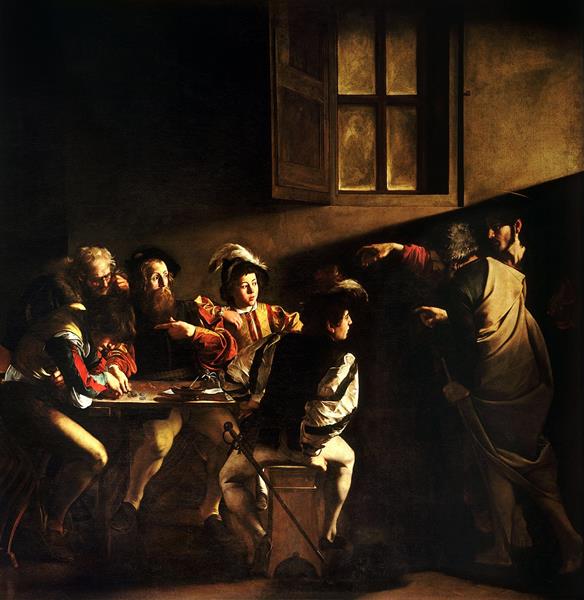 The Calling of Saint Matthew is a masterpiece by Michelangelo Merisi da Caravaggio, depicting the moment at which Jesus Christ inspires Matthew to follow him. It was completed in 1599–1600 for the Contarelli Chapel in the church of the French congregation, San Luigi dei Francesi in Rome, where it remains today. It hangs alongside two other paintings of Matthew by Caravaggio, The Martyrdom of Saint Matthew (painted around the same time as the Calling) and The Inspiration of Saint Matthew (1602).

Over a decade before, Cardinal Matthieu Cointerel (in Italian, Matteo Contarelli) had left in his will funds and specific instructions for the decoration of a chapel based on themes related to his namesake, St Matthew. The dome of the chapel was decorated with frescoes by the late Mannerist artist Cavalier D'Arpino, Caravaggio's former employer and one of the most popular painters in Rome at the time. But as D'Arpino became busy with royal and papal patronage, Cardinal Francesco Del Monte, Caravaggio's patron and also the prefect of the Fabbrica of St Peter's (the Vatican office for Church property), intervened to obtain for Caravaggio his first major church commission and his first painting with more than a handful of figures.

The painting depicts the story from the Gospel of Matthew (Matthew 9:9): "Jesus saw a man named Matthew at his seat in the custom house, and said to him, "Follow me", and Matthew rose and followed Him." Caravaggio depicts Matthew the tax collector sitting at a table with four other men. Jesus Christ and Saint Peter have entered the room, and Jesus is pointing at Matthew. A beam of light illuminates the faces of the men at the table who are looking at Jesus Christ.

There is some debate over which man in the picture is Saint Matthew, as the surprised gesture of the bearded man at the table can be read in two ways.

A more recent interpretation proposes that the bearded man is in fact pointing at the young man at the end of the table, whose head is slumped. In this reading, the bearded man is asking "Him?" in response to Christ's summons, and the painting is depicting the moment immediately before a young Matthew raises his head to see Christ. Other writers describe the painting as deliberately ambiguous.