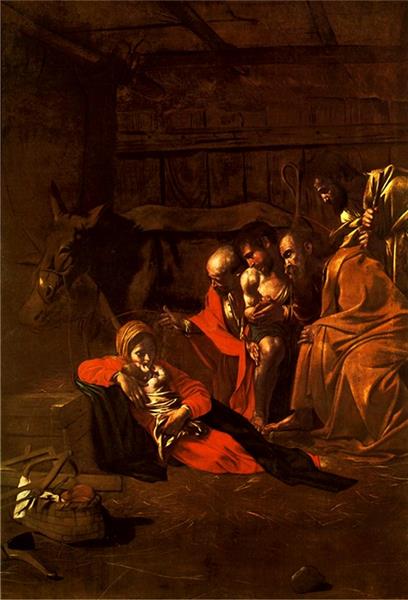 Adoration of the Shepherds

Michelangelo Merisi, commonly known as Caravaggio, was born in Milan in the northern region of Lombardy, Italy in 1571. He had to flee from his hometown after wounding a police officer in a tavern brawl. As with most other aspiring artists, he went to Rome to study classical techniques. Throughout his young adult life, Caravaggio was known amongst Italian citizens to be quite unruly and rebellious. He was often arrested on charges for violent behavior.

Cardinal Francesco del Monte took a struggling Caravaggio into his home, and introduced him to his circle—thereby securing Caravaggio with his first public commissions. These commissions were not religious, but entirely secular paintings ranging from flowers and fruit to paintings of a young classical Greek god. It was during this time that he would become world-renowned for the physical particularity and brutal realism of his paintings. In 1599, Caravaggio reached a turning point in his artistic career.

Presumably under Cardinal Francesco de Monte, Caravaggio was commissioned to decorate a wall dedicated to Saint Matthew in the Contarelli Chapel in the church of San Luigi dei Francesi. This was Caravaggio’s first religious work for the Catholic Church. He began to be seen as an artistic visionary for the Church with his use of anachronistic technique to draw people back to the Catholic Church during the Counter Reformation. With this good publicity, he began to pick up many more prestigious commissions. Caravaggio painted from life rather than drawings, which initially received criticism but later revolutionized the term “artistic realism”.

Caravaggio mysteriously died in 1610, a year after finishing The Adoration of the Shepherds.

By the time that Caravaggio painted The Adoration of the Shepherds in 1609, the subjects in his paintings had acquired a more spiritual expressiveness. His figures were isolated against vast, empty backgrounds. This was a contrast to the Renaissance technique of employing decorative backgrounds.

The Capuchins were among the few religious patrons and critics who were fond of Caravaggio’s brutal realism. Many were critical of Caravaggio’s approach to his religious paintings and called it “vulgar” to represent biblical figures as ordinary peasants. The focal point of the scene is Mary in the center. She is swathed in bright red. One of the three shepherds closest to her also has a little bit of what appears to be the same red robe draped along his arm. This might be symbolic of the gesture he is making to touch the Virgin as she is holding Christ. All three shepherds, as well as Joseph identified by a faint halo, look on with amazement and complete adoration at this infant child born in a barn.

Caravaggio’s Baroque work is starkly different and revolutionary from Renaissance predecessors. To start, these divine figures are represented as ordinary people of the times. They are barefoot with ordinary robes. There is no divinity in the barn, either. There is no holy light source to shine the entire scene and make it overly-apparent that a divine event is occurring. Instead, the background is extremely dark with only a small single light source. It seems as though the space was lit by a single candle, as it might have realistically been during the actual event. We know that in the biblical account, Mary and Joseph were extremely poor. Their halos are almost barely seen, in contrast to the ornate halos of the Renaissance. Other than the halos, the clasped hands of the shepherds is the only thing hinting of any religious importance in the painting. There was nothing overtly marvelous about the birth of Christ. Caravaggio renders this aspect perfectly.