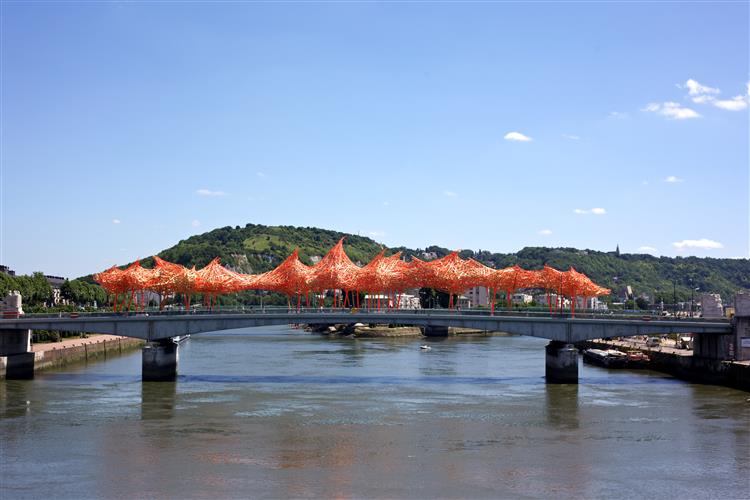 In 2010, the French department of Normandy, the birthplace of impressionism, organized a grand festival to honour the ancient masters. In addition to this heritage part, the city of Rouen also decided to organize a festival of contemporary art, called Rouen Impressionnée, to show that ancient and modern works of art can perfectly supplement each other. ‘Camille’ was born on the Boieldieu Bridge as part of this festival and owes its name to the link with impressionism.

Arne Quinze likes to determine the location of where a sculpture is built himself. This often leads to difficult discussions as it is not always easy to obtain the right permits and to rouse the interest of the local population for a project. people do not like to give up their daily habits. He immediately knew that he wanted to place a gigantic construction (120 metres long, between 6 and 20 metres high) on the most centrally located bridge in the town, the Boieldieu Bridge. The inhabitants of the left and right banks lived very separated from each other due to the clearly visible separation, which the river Seine had established during the course of history.

For the duration of the festival, the bridge was closed to all traffic, a radical decision for the town’s inhabitants. No less than 40 per cent of all traffic in the city makes use of this bridge. This pedestrian area was necessary to enable the people from both sides of the river to meet each other in the middle of the bridge, below the wooden sculpture. There, they came to a halt and started talking to each other again, amazed and astonished by the sculpture.

This sculpture was not only a place of interest for the local population, but no less than 2 million visitors came down to Rouen to see the sculpture from up close. During the festival, which only lasted for two months, the inhabitants of Rouen started a petition not to tear down the sculpture. This was real proof that ‘Camille’ did indeed have an effect on people’s lives. The town council also recognized this, because at this moment, plans are circulating to reconstruct the banks of the rivers in certain places and to integrate various art installations in these places. As a result of the emptiness left by ‘Camille’, the way Rouen looks will forever change.