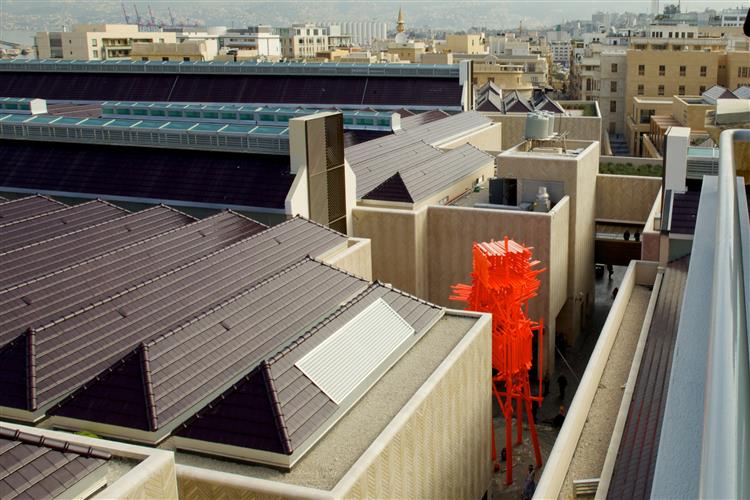 The Visitor’ is a 16-meter-high Stilt House, hidden in the midst of the renewed Souk buildings in the centre of Beirut. This large Stilt House has the same features as its smaller editions. (The artist makes smaller sculptures and paintings in which Stilt Houses are incorporated.) Stilt Houses have the appearance of fragile, vulnerable people, who keep on standing and surviving in every context, despite their thin legs. They are proof of man’s incredible flexibility.

During the construction of the ‘The Visitor’, Arne Quinze was influenced by the reflection of the bright sunlight on the buildings, built in white
natural stone. As a result of this reflexion, in the evening, the Stilt House radiates a warm orange glow, which attracts people from near and far to this part of the town to discover where this glow comes from. You have to be prepared to get lost in the narrow streets of the Souk to discover this stranger in the city. Once they have got in touch with this strange visitor, Arne Quinze hopes that people will be stimulated to continue with an open mind and rediscover the city, starting from a whole new perspective. This is what his patrons, Solidere, also wanted to achieve. A renewed Beirut, which leaves its past behind and moves towards the future with an open mind: a modern city in the Middle East.