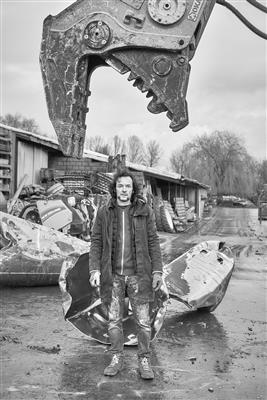 Taken during the making of the sculpture exhibition called My Secret Garden — Valencia, a dialogue with Calatrava

‘Cities like open-air museums – it sounds like an idealistic dream, but I am striving to realize this dream. Confronting a public surrounded by art every day. Art has a positive influence on people and their personal development: it broadens their horizons and renders them more tolerant towards differences in society.’

Arne Quinze was born in 1971 in Belgium and lives and works in Sint- Martens-Latem, Belgium and Shanghai, China. In the eighties he began working as a graffiti artist but he never finished an official art education. Quinze creates large and small sculptures, drawings, paintings, and large- scale installations. Smaller works, sketches, and drawings are the basis and research for his large installations. Recurring fundamentals in his oeuvre are the use of multiple types of wood, including salvaged wood, metal and bronze, coloured glass, electrical colours in fluorescent paint, and themes referring to social interaction, communication and urbanism. Since a while he’s doing research towards large-scale steel installations.

What drives Quinze is the belief in the possible realization of an idealistic society where all individuals communicate and interact, aiming to bring people together and push them into a vigorous dialogue. In his urban vision, communal activities flourish and social cohesion is the norm. His installations are built to provoke reaction and to intervene in the daily life of passersby confronted with his sculptures. His unconventional public installations have challenged perceptions in the city centers of Belgium (Cityscape, The Sequence), Germany (The Traveller), France (Camille, Rock Strangers), Lebanon (The Visitor), China (Red Beacon, Chaos Wind), the USA (Uchronia, Timegate), Brazil (Matarazzo), Spain (My Secret Garden Valencia) among others.

In every culture Quinze comes across, he unravels physical processes, drawing inspiration for his oeuvre, and is fueled by overwhelming optimism. Every new creative breed captures his research and study on interaction, and urban movement expressing the continuously evolution of human beings and their surroundings. Besides building architectural sculptures, he creates complex art pieces and video installations inscribing his vision in society of how people see themselves and society. Works as My Secret Garden, Bidonvilles, Stilthouses, Chaos, My Home My House My Stilthouse and My Safe Garden have been shown on several exhibitions.

Arne Quinze (born 15 December 1971) is a Belgian conceptual artist best known for his unconventional and controversial public art installations. Quinze also creates large and small sculptures, drawings, and paintings. In his late teens, he started out as a graffiti artist in Brussels, and he never completed a formal art education.


Quinze is known for his trademark sculptures made out of wooden planks. His installations are built to provoke reaction and to intervene in the daily life of passersby confronted with his sculptures. Quinze sees his installations as places where people meet each other again and start conversations.


In 2006, he gained a lot of attention by building Uchronia: A message from the future, a large wide wooden sculpture at the Burning Man festival in Black Rock City,in the Nevada desert, United States. Cityscape (2007) and The Sequence (2008) are two of his giant wooden public art installations in the centre of Brussels, Belgium. It was the first time a sculpture gave the impression touching two buildings in the city center while traffic still passes by underneath it. The installation for the Flemish Parliament became an unequivocal actor in the city. In Munich, Germany, he built Traveller (2008) for French luxury fashion and leather goods brand Louis Vuitton. Other public art installations by Arne Quinze have recently been revealed in the centre of Paris, France (Rebirth, 2008), Beirut, Lebanon (The Visitor, 2009) and Louisville, Kentucky (Big Four Bridge, ongoing)


During the festival Rouen Impressionnée which took place in Rouen in the summer of 2010 he paid tribute to the impressionist Claude Monet by painting Les Jardins/The Waterlilies series for an exhibition in the Abbatiale de Saint-Ouen. The festival was organized as the contemporary component of the Normandie Impressionniste festival, a festival under the presidency of Laurent Fabius, former French Prime Minister, celebrating the impressionist past of the region. Next to the exhibition an installation (Camille) was built on the Boieldieu bridge, a bridge that has been painted by the impressionist painter Camille Pissarro several times.


Like a futuristic substitute for the market squares of old, Quinze sees his installations as places where people meet and converse as they used to in bygone eras. Red Beacon (2010) is placed in the Jing’an Sculpture Park, the pioneer of presenting public art in the heart of Shanghai located downtown in the Jing'an District. His sculptures redefine social space and provide alternative models of interaction.


Other work is focusing on the axiom that people tend to seek a safe environment, a cocoon eliminating the unexpectable. The installation My Home My House My Stilthouse (2011) in Humlebaek, Denmark at the Louisiana Museum of Modern Art shows the visitor a new form of how housing and living can be perceived.


He revealed a virtual installation Rock Strangers (2011) on the Statue of Liberty in New York City, US on 4 July in collaboration with Beck's for their Green Box Project. The project is co-curated, commissioned and mentored by Nick Knight of SHOWstudio.com and producer Sam Spiegel. Commissioned work will only ever appear in the digital realm.