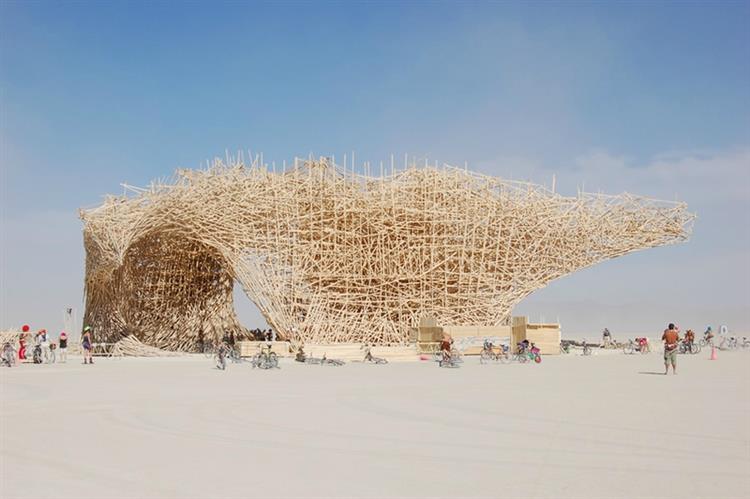 Black Rock City (NV, US) · Burning Man Festival: Uchronia
Once a year, tens of thousands of people gather in the Nevada Black Rock desert in to celebrate the Burning Man festival. There, they build up Black Rock City literally from nothing, focussing on the basic ideas of community, art and self- expression. After one week, they again leave the desert without being allowed to leave a single trace of their presence.

Arne Quinze had already set up similar constructions in Chicago, Miami and New York, but in 2006, his Nevada construction defied every kind of imagination as far as scale and size is concerned. No less than 150 km of wooden beams was used to construct ‘Uchronia’ and after 3 weeks, the 25-strong team had finished the complete sculpture. Uchronia’s enormous scale gave the people a protective feeling,
which persuaded them to remain there as long as possible. Sunbeams played with the wooden beams and resulted in a fascinating spectacle of light and shadow with consistently changing patterns.

At the end of the 7-day festival, the sculpture got its grand finale. In accordance with the festival’s philosophy in returning the desert to its original state, Arne Quinze set his work of art on fire. For him, burning the sculpture signified a symbol of transition, not to be afraid of starting anew, a transition into a new phase and sharing the energy which resulted from this process.

All of a sudden, people shared indescribable emotions with each other. This is the kind of communication Arne Quinze’s work is all about.