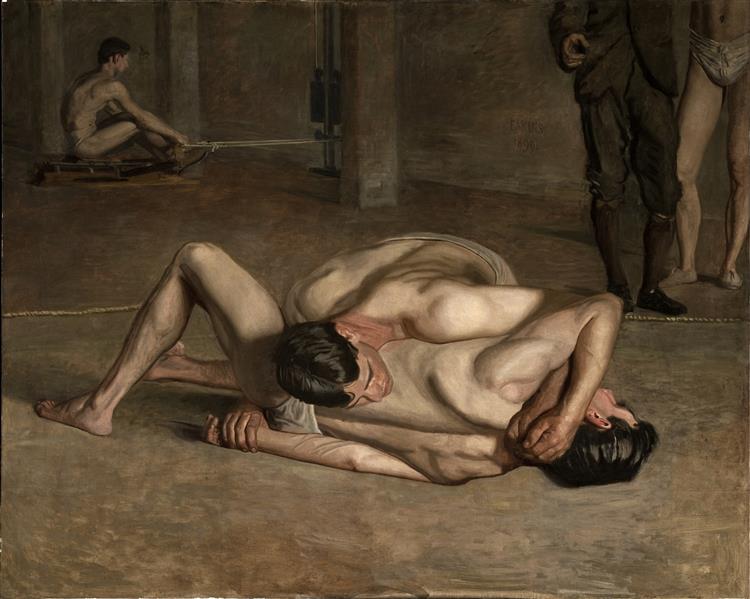 Wrestlers is a name shared by three closely related 1899 paintings by American artist Thomas Eakins, (Goodrich catalog #317, #318, #319). The Los Angeles County Museum of Art (LACMA) owns the finished painting (G-317), and the oil sketch (G-318). The Philadelphia Museum of Art (PMA) owns a slightly smaller unfinished version (G-319). All three works depict a pair of nearly naked men engaged in a wrestling match. The setting for the finished painting is the Quaker City Barge Club (defunct), which once stood on Philadelphia's Boathouse Row.

On May 22, 1899, Eakins had two wrestlers pose in his 4th-floor studio at 1729 Mount Vernon Street, Philadelphia. Three days earlier, he had written to his friend, sportswriter Clarence Cranmer: "I am going to start the wrestling picture on Monday at half past two. I wish you could find it convenient to be at the studio and help us with advice as to positions and so forth." The artist's protégé Samuel Murray may have been present; he modeled a small sculpture of the wrestlers that is also dated 1899. Eakins painted the works from the live models and from a nearly identical photograph, that may have been taken that day. The photograph shows the wrestler on top holding the other in a half nelson and crotch hold.

PMA's unfinished version (G-319) was painted before the finished painting (G-317), and is thought to be an abandoned composition rather than a study. LACMA's finished painting (G-317) is larger, and features a well-defined setting with additional figures in the background. LACMA's oil sketch (G-318) varies from the other paintings in the position of the head and shoulders of the wrestler on top.

Eakins donated the finished version of Wrestlers to the National Academy of Design (NAD) as a "reception piece," when he was elected to membership in early 1902. Later that year, he painted a self-portrait and donated it to NAD when he was elected an Academician. NAD deaccessioned the finished version in 1968, and sold it in 1970 to the Columbus Museum of Art. It was part of that museum's permanent collection until 2005, when it was deaccessioned to raise funds for the purchase of the Philip J. and Suzanne Schiller collection of American art. Philanthropist Cecile Bartman funded LACMA's 2006 purchase of the finished painting, so it and its sketch would be reunited.

Eakins died in 1916, and a collection of his unsold paintings was exhibited at the 1926 Sesquicentennial Exposition in Philadelphia. PMA Director Fiske Kimball saw the abandoned version of Wrestlers at the world's fair, and inquired about buying it. According to Kimball, Cranmer (who was acting as the dealer for Eakins's widow) said the abandoned version had been valued low, and had not been included in the Eakins memorial exhibitions of a decade earlier. "He [Cranmer] said he would find out the price. It was $400. I bought it and by Christmas 1926 it was hanging in the library at Lemon Hill." Letters from Cranmer to Kimball in the PMA Archives identify the wrestler on top as Joseph McCann, but do not identify the man on the bottom. Kimball died in 1955, and made the abandoned version a bequest to his museum.