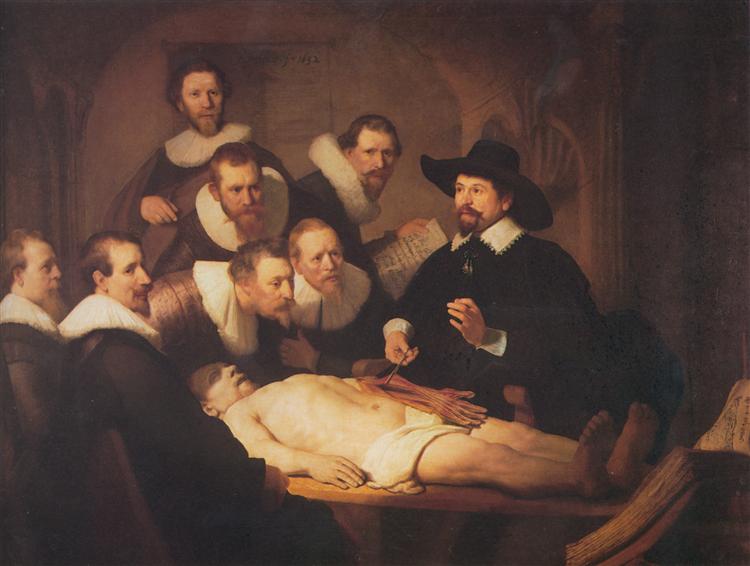 The Anatomy Lesson of Dr. Nicolaes Tulp is a 1632 oil painting on canvas by Rembrandt housed in the Mauritshuis museum in The Hague, the Netherlands. The painting is regarded as one of Rembrandt's early masterpieces.

In the work, Dr. Nicolaes Tulp is pictured explaining the musculature of the arm to medical professionals. Some of the spectators are various doctors who paid commissions to be included in the painting. The painting is signed in the top-left hand corner Rembrandt. f[ecit] 1632. This may be the first instance of Rembrandt signing a painting with his forename (in its original form) as opposed to the monogramme RHL (Rembrandt Harmenszoon of Leiden), and is thus a sign of his growing artistic confidence.

The event can be dated to 31 January 1632: the Amsterdam Guild of Surgeons, of which Tulp was official City Anatomist, permitted only one public dissection a year, and the body would have to be that of an executed criminal.

Anatomy lessons were a social event in the 17th century, taking place in lecture rooms that were actual theatres, with students, colleagues and the general public being permitted to attend on payment of an entrance fee. The spectators are appropriately dressed for this social occasion. It is thought that the uppermost (not holding the paper) and farthest left figures were added to the picture later.

Every five to ten years, the Surgeon's Guild would commission a portrait by a leading portraitist of the period; Rembrandt was commissioned for this task when he was 26 years old, and newly arrived in Amsterdam. It was his first major commission in Amsterdam. Each of the men included in the portrait would have paid a certain amount of money to be included in the work, and the more central figures (in this case, Dr. Tulp) probably paid more, even twice as much. Rembrandt's anatomical portrait radically altered the conventions of the genre, by including a full length corpse in the center of the image (using Christ-like iconography) and creating not just a portrait but a dramatic Mise-en-scène. Rembrandt's image is a fiction; in a typical anatomy lesson, the surgeon would begin by opening the chest cavity and thorax because the internal organs there decay most rapidly.

One person is missing: the Preparator, whose task was to prepare the body for the lesson. In the 17th century an important scientist such as Dr. Tulp would not be involved in menial and bloody work like dissection, and such tasks would be left to others. It is for this reason that the picture shows no cutting instruments. Instead we see in the lower right corner an enormous open textbook on anatomy, possibly the 1543 De humani corporis fabrica (Fabric of the Human Body) by Andreas Vesalius.

The corpse is that of the criminal Aris Kindt (alias of Adriaan Adriaanszoon), who was convicted for armed robbery and sentenced to death by hanging. He was executed earlier on the same day of the scene. The face of the corpse is partially shaded, a suggestion of umbra mortis (shadow of death), a technique that Rembrandt was to use frequently.