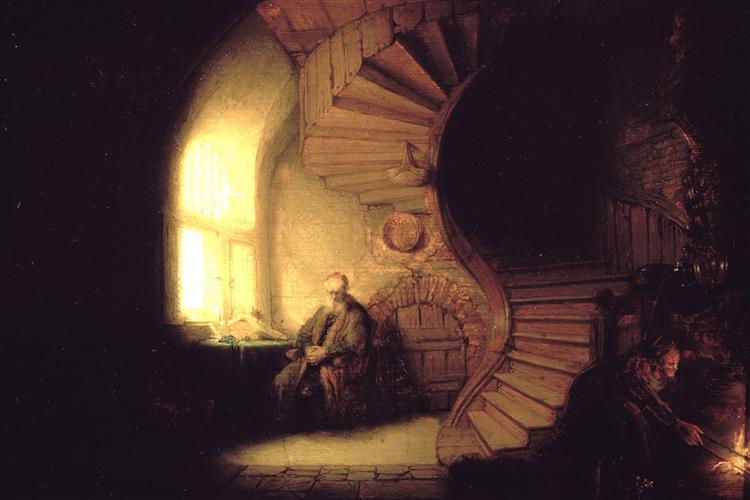 Philosopher in Meditation (Bredius 431) is the traditional title of an oil painting in the Musée du Louvre, Paris, that has long been attributed to the 17th-century Dutch artist Rembrandt.

It is signed "RHL-van Rijn" and dated 1632, at the time of Rembrandt's move from Leiden to Amsterdam. Recent scholarship suggests that the painting depicts "Tobit and Anna waiting for their son Tobias" instead. This interpretation appears in the first known source, an auction catalogue from 1738 (see "Subject matter").

The painting appeared in Paris around the middle of the 18th century and made the rounds of aristocratic collections before being acquired for the royal collections housed in the Louvre Palace. The presumed subject matter, the finely graded chiaroscuro treatment and intricate composition were widely appreciated in France and the painting is mentioned in the writings of many 19th- and 20th-century literary figures, including George Sand, Théophile Gautier, Jules Michelet, Marcel Proust, Paul Valéry, Gaston Bachelard, Paul Claudel, and Aldous Huxley.

The popularity of the painting may be measured by its presence on the internet, where it is often used as an emblem of philosophy, or interpreted along esoteric or occult lines.

Painted in oils on an oak panel measuring about 11 x 13 in. (28 x 34 cm), the painting depicts in slightly accelerated perspective two figures in a partially vaulted interior that is dominated by a wooden spiral staircase. The architecture includes stone, brick and wood, with arched elements (window, vault, doors) that create an impression of monumentality. On the pre-iconographic level, this is one of the most "graphic" works painted by Rembrandt, in the sense that it contains many straight, curved, circular, and radiating lines: from the lines of the flagstones to those of the window, the bricks, the wainscotting, and of course the staircase. As in the staircase and the basketwork tray at the center of the composition, the curved lines can be said to organize the straight lines. The first figure is that of an old man seated at a table in front of a window, his head bowed and his hands folded in his lap. The second figure is that of an old woman tending a fire in an open hearth. A third figure—a woman standing in the stairs carrying a basket and turned to the spectator—is visible in 18th- and 19th-century engraved reproductions of the painting, but virtually invisible in the painting's present state. As it is, the overall painting is quite dark due to the aging of the varnish.

The panel is signed "RHL-van Rijn 163_" at the bottom and left of the center, at a vertical from the figure of the old man. The signature is traced in light pigment on a dark background and is quite difficult to make out. The last digit is a tiny blob of paint, the form and placing of which would tally with a "0," "1" or "2." The type of signature—monogram plus patronymic—would argue for 1632, for the artist used this type of signature only in this year. This does not mean that the picture was painted in that year or even in Amsterdam, to which Rembrandt had moved in late 1631. In any case, this type of signature is so rare in Rembrandt's oeuvre and date-specific that it argues for authenticity.