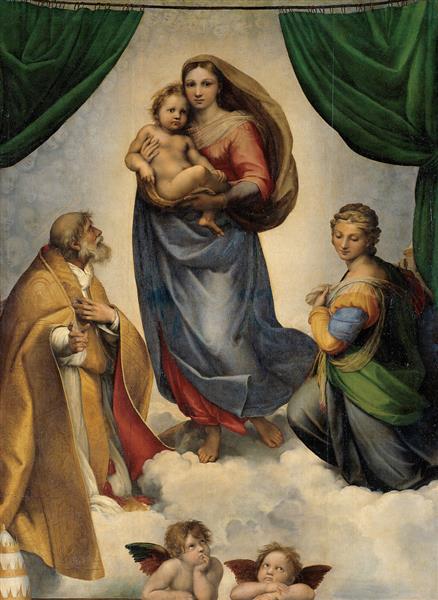 The Sistine Madonna, also called the Madonna di San Sisto, is an oil painting by the Italian artist Raphael Sanzio. The altarpiece was commissioned in 1512 by Pope Julius II for the church of San Sisto, Piacenza. The canvas was one of the last Madonnas painted by the artist. Giorgio Vasari called it "a truly rare and extraordinary work".

Relocated to Dresden from 1754, the well-known painting was particularly influential in Germany. After World War II, it was relocated to Moscow for a decade before being returned to Germany. It is now a masterpiece of the Gemäldegalerie Alte Meister.

The oil painting, measures 265 cm by 196 cm. In the painting the Madonna, holding the Christ Child and flanked by Saint Sixtus and Saint Barbara, stands on clouds before dozens of obscured cherubim, while two distinctive winged cherubim rest on their elbows beneath her.

Pigment analysis of Raphael's masterpiece reveals the usual pigments of the renaissance period such as malachite mixed with orpiment in the green drapery on top of the painting, natural ultramarine mixed with lead white in the blue robe of Madonna and a mixture of lead-tin-yellow, vermilion and lead white in the yellow sleeve of St Barbara.

The painting was commissioned by Pope Julius II in honor of his late uncle, Pope Sixtus IV, as an altarpiece for the basilica church of the Benedictine Monastery of San Sisto in Piacenza, with which the Rovere family had a long-standing relationship. The commission required that the painting depict both Saints Sixtus and Barbara. Legend has it that when Antonio da Correggio first laid eyes on the piece, he was inspired to cry, "And I also, I am a painter!"

In 1754, Augustus III of Poland purchased the painting for 110,000 – 120,000 francs, whereupon it was relocated to Dresden and achieved new prominence; this was to remain the highest price paid for any painting for many decades. In 2001's The Invisible Masterpiece, Hans Belting and Helen Atkins describe the influence the painting has had in Germany:

If the stories are correct, the painting achieved its prominence immediately, as it's said that Augustus moved his throne in order to better display it. The Sistine Madonna was notably celebrated by Johann Joachim Winckelmann in his popular and influential Geschichte der Kunst des Alterthums (1764), positioning the painting firmly in the public view and in the center of a debate about the relative prominence of its Classical and Christian elements. Alternately portraying Raphael as a "devout Christian" and a "'divine' Pagan" (with his distinctly un-Protestant Mary who could have as easily been Juno), the Germans implicitly tied the image into a legend of their own, "Raphael's Dream." Arising in the last decades of the 18th century, the legend—which made its way into a number of stories and even a play—presents Raphael as receiving a heavenly vision that enabled him to present his divine Madonna. It is claimed the painting has stirred many viewers, and that at the sight of the canvas some were transfixed to a state of religious ecstasy akin to Stendhal Syndrome (including one of Freud's patients). This nearly miraculous power of the painting made it an icon of 19th-century German Romanticism. The picture influenced Goethe, Wagner and Nietzsche According to Dostoyevsky, the painting was "the greatest revelation of the human spirit". In 1855, the "Neues Königliches Museum" (New Royal Museum) opened in a building designed by Gottfried Semper, and the Sistine Madonna was given a room of its own.