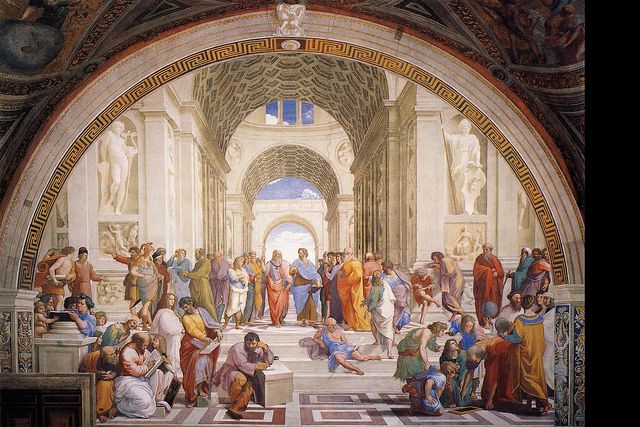 The School of Athens

The School of Athens fresco, which is one of Raphael’s most famous works, was completed to decorate the Stanza della Segnatura commission by the Pope. The Stanza was the first set of rooms to be decorated, and this painting was the second in the set of paintings that adorn the walls. Although it was created for a grand room in the Vatican, nearly every one of the figures in the painting can be identified as a Greek philosopher, rather than a religious character. Raphael included the likeness of Michelangelo himself in the painting, as the philosopher Heraclitus.

The School of Athens (Italian: Scuola di Atene) is a fresco by the Italian Renaissance artist Raphael. It was painted between 1509 and 1511 as a part of Raphael's commission to decorate the rooms now known as the Stanze di Raffaello, in the Apostolic Palace in the Vatican. The Stanza della Segnatura was the first of the rooms to be decorated, and The School of Athens, representing Philosophy, was probably the third painting to be finished there, after La Disputa (Theology) on the opposite wall, and the Parnassus (Literature). The picture has long been seen as "Raphael's masterpiece and the perfect embodiment of the classical spirit of the Renaissance".


The School of Athens is one of a group of four main frescoes on the walls of the Stanza (those on either side centrally interrupted by windows) that depict distinct branches of knowledge. Each theme is identified above by a separate tondo containing a majestic female figure seated in the clouds, with putti bearing the phrases: "Seek Knowledge of Causes," "Divine Inspiration," "Knowledge of Things Divine" (Disputa), "To Each What Is Due." Accordingly, the figures on the walls below exemplify Philosophy, Poetry (including Music), Theology, and Law. The traditional title is not Raphael's. The subject of the "School" is actually "Philosophy," or at least ancient Greek philosophy, and its overhead tondo-label, "Causarum Cognitio", tells us what kind, as it appears to echo Aristotle's emphasis on wisdom as knowing why, hence knowing the causes, in Metaphysics Book I and Physics Book II. Indeed, Plato and Aristotle appear to be the central figures in the scene. However, all the philosophers depicted sought knowledge of first causes. Many lived before Plato and Aristotle, and hardly a third were Athenians. The architecture contains Roman elements, but the general semi-circular setting having Plato and Aristotle at its centre might be alluding to Pythagoras' circumpunct.


Commentators have suggested that nearly every great ancient Greek philosopher can be found in the painting, but determining which are depicted is difficult, since Raphael made no designations outside possible likenesses, and no contemporary documents explain the painting. Compounding the problem, Raphael had to invent a system of iconography to allude to various figures for whom there were no traditional visual types. For example, while the Socrates figure is immediately recognizable from Classical busts, the alleged Epicurus is far removed from his standard type. Aside from the identities of the figures depicted, many aspects of the fresco have been variously interpreted, but few such interpretations are unanimously accepted among scholars.


The popular idea that the rhetorical gestures of Plato and Aristotle are kinds of pointing (to the heavens, and down to earth) is very likely. But Plato's Timaeus – which is the book Raphael places in his hand – was a sophisticated treatment of space, time, and change, including the Earth, which guided mathematical sciences for over a millennium. Aristotle, with his four-elements theory, held that all change on Earth was owing to motions of the heavens. In the painting Aristotle carries his Ethics, which he denied could be reduced to a mathematical science. It is not certain how much the young Raphael knew of ancient philosophy, what guidance he might have had from people such as Bramante, or whether a detailed program was dictated by his sponsor, Pope Julius II.