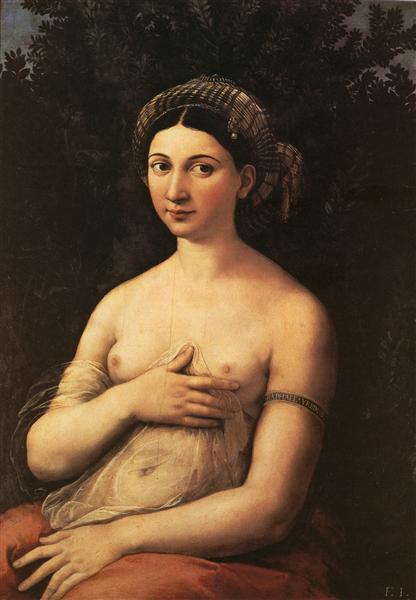 The Portrait of a Young Woman (La Fornarina)

Raphael never married. Although he was engaged for a short time, he was unmotivated to wed, and the bride-to-be died before they were wed. He did, however, have a long-time mistress, Margherita Luti, who was the daughter of a baker. X-ray analysis of the painting has revealed that the background of the painting was originally painted as a myrtle bush, which was considered a symbol of love and passion. According to Vasari, in his biography of Raphael, his death was brought on by a sudden illness, which was caused by a night of excessive sex with Luti. Being embarrassed and not disclosing this fact to his doctors, he subsequently received the wrong treatment and died two weeks later.

The Portrait of a Young Woman (also known as La fornarina) is a painting by the Italian High Renaissance master Raphael, made between 1518 and 1519. It is in the Galleria Nazionale d'Arte Antica in Palazzo Barberini, Rome.

It is probable that the picture was in the painter's studio at his death in 1520, and that it was modified and then sold by his assistant Giulio Romano. In the 16th century the picture was in the house of the Countess of Santafiora, a Roman noblewoman, and subsequently became property of the Duke Boncompagni and then of the Galleria Nazionale which still possesses it.

The woman is traditionally identified with the fornarina (baker) Margherita Luti, Raphael's Roman lover, though this has been questioned. The woman is pictured with an oriental style hat and bare breasts. She is making the gesture to cover her left breast, or to turn it with her hand, and is illuminated by a strong light coming from outside. Her left arm has a narrow band carrying the signature of the artist, RAPHAEL URBINAS. It has been suggested that the right hand on the left breast reveals a cancerous breast tumour disguised in a classic pose of love. Another speculation is that she is touching her left breast to remind herself which side she last fed her child on, the child being Raphael's.

X-Ray analyses have shown that in the background was originally a Leonardesque-style landscape in place of the myrtle bush, which was sacred to Venus, goddess of love and passion.