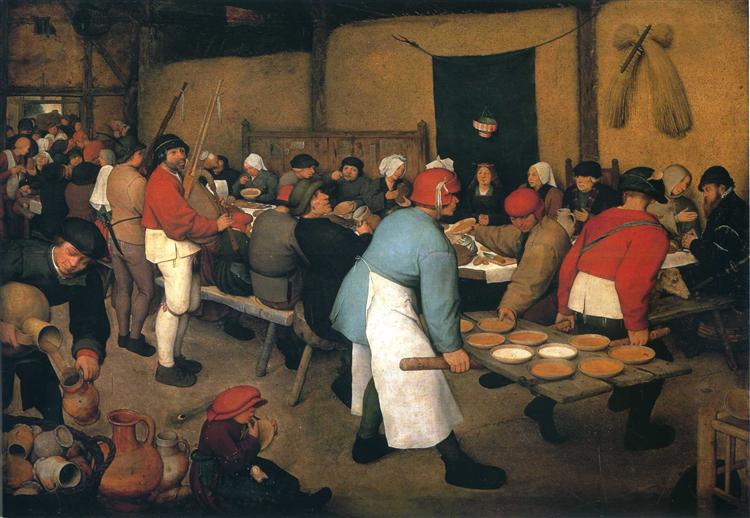 The Peasant Wedding is a 1567 genre painting by the Flemish Renaissance painter and printmaker Pieter Bruegel the Elder, one of his many depicting peasant life. It is currently housed in the Kunsthistorisches Museum, Vienna. Pieter Bruegel the Elder enjoyed painting peasants and different aspects of their lives in so many of his paintings that he has been called Peasant-Bruegel, but he was in fact a sophisticated intellectual, and many of his paintings have a symbolic meaning and also a moral aspect.

The bride is in front of the green textile wall-hanging, with a paper-crown hung above her head. She is also wearing a crown on her head, and she is sitting passively, not participating in the eating or drinking taking place around her. The Bridegroom is not in attendance of the wedding feast in accordance to Flemish custom. The feast is in a barn in the summertime; two sheaves of grain with a rake recalls the work that harvesting involves, and the hard life peasants have. The plates are carried on a door off its hinges. The main food was bread, porridge and soup. Other features of the scene include two pipers playing the pijpzak, an unbreeched boy in the foreground licking a plate, the wealthy man at the far right feeding a dog by putting bread on the bench, and a mysterious extra foot seen under the load of dishes being carried by the two men in the right foreground. The scene is claimed to depict an accurate portrayal of the 16th-century way of celebrating a peasant wedding.

There has been much conjecture as to the identity of the groom in this painting. Gilbert Highet has argued that the groom is the man in the centre of the painting, wearing a dark coat and seen in profile, or the ill-bred son of a wealthy couple, seen against the far wall, to the right of the bride, eating with a spoon, same as Gustav Glück. It has also been suggested that according to contemporary custom, the groom is not seated at the table but may be the man pouring out beer. Or he may be according to the same custom serving the food instead. According to this theory, the groom is the young man wearing a red cap, who is serving his guests the food, handing out plates to his guests.

Some authors have even suggested that the groom is not even included in the painting. Van der Elst speculated that this could be the depiction of an old Flemish proverb, like some of "There is an old Flemish proverb: 'It is a poor man who is not able to be at his own wedding.' That seems to be the case here." Some argued that it is a presentation of the mystical Wedding of Cana. Lindsay and Bernard Huppé speculated that the painting was a Christian allegory, symbolizing corruption, depicting the corrupted Church, which was supposed to be the bride of Christ, but the groom has not appeared to claim his corrupt bride.