{{selectedLanguage.Name}}
Sign In Sign out
Action History
×
Home/ Artists / Symbolism .../ Paul Gauguin/ The Vision after the Sermon (Jacob wrestling with the Angel) 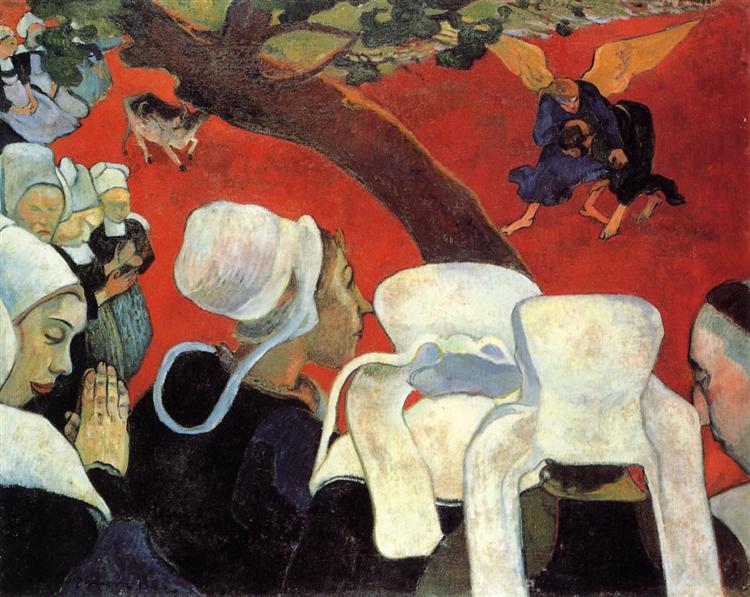 The Vision after the Sermon (Jacob wrestling with the Angel)

One of the most famous works by Paul Gauguin, Vision After the Sermon: Jacob Wrestling with the Angel (1888) was painted during the artist's stay in Pont-Aven, Brittany. The painting refers to the biblical story of Jacob, who crossed the river Jabbok and spent the night wrestling a mysterious angel. The artist depicts the subject indirectly, showing a group of Breton women after a sermon in church. The women moved by the sermon see a vision of Jacob wrestling the angel.

The available information about the painting comes primarily from two sources: letters written by Gauguin and writings by Post-Impressionist artist Emile Bernard. Bernard spent the summer of 1888 with Gauguin in Pont-Aven – the two worked side by side, and while Gauguin painted Vision After the Sermon Bernard worked on the painting Breton Women in the Meadow (1888). The two paintings share stylistic similarities and are both examples of Cloisonnism – a post-impressionist style characterized by bold flat forms enclosed by dark outlines. Both artists also shared an affinity for Japanese art, and Bernard wrote that the motif of Jacob wrestling the angel in Vision After the Sermon was modeled after Hokusai’s Sumo Wrestlers.

Gauguin used the term Synthetism to describe paintings such as Vision After the Sermon, in which he aimed to synthesize between the outward appearance of the subject, the artist’s emotional response to the subject, and the aesthetic considerations of line, form, and color. In Vision After the Sermon, Gauguin creates a synthesis between two realities: the everyday life of the Breton women and their vision of the biblical event. In a letter to Vincent Van Gogh, he wrote about the sermon that inspired the painting: “For me, the landscape and the fight only exist in the imagination of the people praying after the sermon which is why there is a contrast between the life-size people and the struggle in its non-natural disproportionate landscape”. For this reason, Gauguin emphasized the contrast between the dramatic fight scene and the serenity of the women quietly praying.

By weaving together different Christian symbols, Gauguin added new content and meaning to the religious subject. In the foreground, he depicted twelve Breton women in prayer, a symbolic reference to Jacob’s twelve sons, the predecessors of the twelve tribes of Israel. The apple tree in the center of the composition was another non-traditional addition to the story of Jacob. In the bible, the apple tree is a symbol of knowledge, a reference to man’s awakening, and subsequently his fall from grace. In Vision After the Sermon, the apple tree is full and lush, suggesting the possibility of man’s redemption and a possible return to paradise. Another important component is the bull emerging from the left corner of the painting. The bull is possibly a sacrificial animal, and as such, it can hint to the sacrifice of Christ and the chance for redemption. The bull is also connected to Breton, it is a symbol attributed to four Breton saints. In this way, Gauguin formed a connection between his unique symbolism and the spirituality of the devout Breton women.

Vision after the Sermon (Jacob Wrestling with the Angel) is an oil painting by French artist Paul Gauguin, completed in 1888. It is now in the National Gallery of Scotland, Edinburgh. It depicts a scene from the Bible in which Jacob wrestles an angel. It depicts this indirectly, through a vision that the women depicted see after a sermon in church. It was painted in Pont-Aven, Brittany, France.

Gauguin started off landscape painting in the summer en plein air but following the creation of Vision After the Sermon he focused increasingly on interpreting religious subject matter in a highly personal way.

The use of color, shape, and line in Vision After the Sermon is appreciated for its bold manner of handling paint. Finding inspiration in Japanese woodblock prints from Hiroshige and Hokusai, which he owned, Gauguin developed the idea of non-naturalistic landscapes. He applies large areas of flat color to the composition, and the red ground departs from conventional representation of earth, field, or grass. In portraying the watching figures Gaugin experiments with the distortion of shapes, exaggerating features, and use of strong contour lines rather than gradual shifts in tone that most painters practiced. The brown trunk, black garments, white hats and red field are painted with minimal color shading. Gauguin is showing it is possible to move away from naturalism towards a more abstracted, even symbolic, manner of painting. While formal elements of Gauguin's paintings reflect the influence of Japanese prints, his choice of subject matter and composition are uniquely his own.

Gauguin structures the painting by placing a tree trunk diagonally through its center. By sectioning the image this way, he creates a visual separation between the Breton women and their vision of an angel wrestling with Jacob. This compositional decision is developed to frame the main subjects of the painting. The curve of the trunk follows the line of the head of the center-most figure. The branches and leaves shoot out directly toward the upper right corner of the painting to form a second frame around the angel and Jacob. The overall perspective of this painting is purposely skewed but effectively accomplished by his clustering of people in diminished sizes along its left edge.

“Further, it was Emile Bernard who pointed out the general influence of Japanese prints on Gauguin’s work. This seems self-evident when one compares Gauguin’s Vision after the Sermon to Vincent van Gogh’s Trees, a copy after Hiroshige, with its diagonally placed tree and use of red. In citing Hokusai’s Sumo wrestlers in The Manga, however, Bernard was being more specific. He designated them as the source of Gauguin’s struggling angel and Jacob”. One can see their features, in the faces, of the women that are closer to the viewer. The tale of Jacob wrestling an angel is from Genesis 32:22-31 in the Old Testament. Gauguin is making use of Brenton themes while at the same time leaning towards abstraction. The women, one of whom clasps her hands in prayer, are wearing a variety of white hats and seem to be the ones having this vision. Several colors stand out above the rest, including the reds, black, and white, and contribute to the visual energy of the scene. The color most likely to catch the viewer's attention first in this painting would be red, which in this particular painting lends power to the struggle that is occurring.