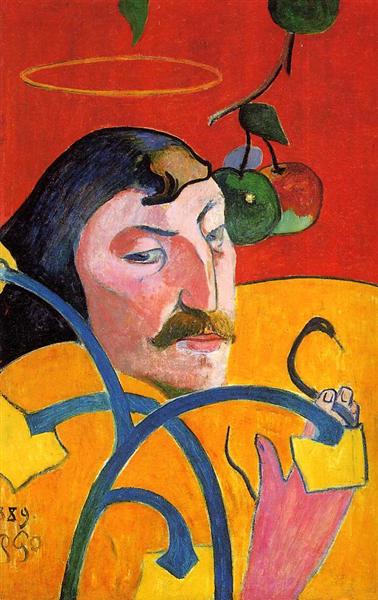 Self Portrait with Halo and Snake

Self-portrait with Halo and Snake (1889) is a unique and radical self-portrait in the artist’s body of work. His interest in self-portraiture was especially pronounced in 1888 and 1889, in part because of his relationship with his fellow artist Vincent Van Gogh. Gauguin stayed with Van Gogh in Arles for two months in 1888, and afterward, the two continued to exchange artistic ideas through correspondence.

Painted on a cupboard door, Self-portrait with Halo and Snake presents an image that is both angelic and demonic. The artist includes three Christian symbols in the painting – the yellow halo over his head, the apples that dangle from a branch on the left, and the snake which he holds in his right hand. Together these symbols reference the biblical story of the Temptation of Adam and Eve and the Fall of Man. By combining these symbols, Gauguin presents himself as both a saint and a sinner or a figure of a fallen angel. This duality is also evident in the composition of the painting: the top half depicts Gauguin with the halo looking away from the temptation (apples) while the bottom half shows grasping the snake. The image possibly reflects the artist’s inner struggle as well as the enigmatic way in which he wished to portray himself to others.

In the painting, there is no sense of spatial dimension, and the large areas of flat colors demonstrate the influence of Japanese prints and Cloisonnism – a post-impressionist style characterized by bold flat forms enclosed by dark outlines. Another important influence in Self-portrait with Halo and Snake is ancient Egyptian art and imagery. The shape of Gauguin’s long hair is similar to the ceremonial wigs of Egyptian gods, Pharaohs, and court officials. Gauguin was familiar with these conventions through the plaster cast of the Giza sculpture of The Pharaoh Khephren at the Ethnographic Museum of Trocadéro and the Relief from the Tomb of Sethos I at the Louvre. The Egyptian influence is also evident in the way Gauguin paints the hand and the snake. The snake was possibly modeled after the snake symbol featured on Pharaoh’s personal emblem on the Stela of Djet at the Louvre. The grasp of the snake is not realistic, and the hand is depicted from a frontal view which is characteristic of Egyptian reliefs and wall paintings. In the foreground of the painting, Gauguin added an ornamental element of a vine-like plant or flower. The vines could have been modeled after the lotus and the papyrus plant, that were often featured on Egyptian reliefs, sculptures, and wall paintings.

Self-portrait with Halo and Snake is a companion piece to [i]Portrait of Jacob Meyer de Haan[/i] (1889). The two works were intended to be part of a decorative panel in Gauguin’s dwelling in the village Le Pouldu. The companion portrait depicts Gauguin’s close friend, the Dutch painter Meijer de Haan in the pose of a thinker. The redhaired painter is staring at two books, John Milton’s Paradise Lost and Thomas Carlyle’s Sartor Resartus, contemplating issues of religion and philosophy. Some have suggested that the portraits address similar themes through different references: both present the artist in a sort of inner struggle and as figures that have a strong connection to the spiritual and mystical realm.