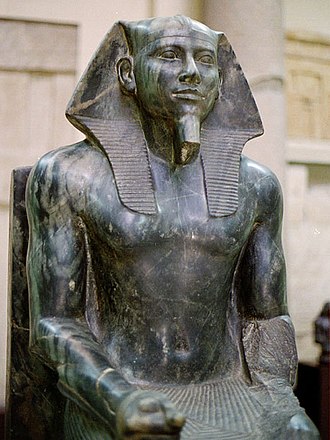 Khafre Enthroned is a funerary statue of the Pharaoh Khafre, who reigned during the Fourth dynasty of ancient Egypt (c. 2570 BC). It is now located in the Egyptian Museum in Cairo. The construction is made of anorthosite gneiss, (related to diorite) a valuable, extremely hard, and dark stone brought 400 miles down the Nile River from royal quarries. This highlights Khafre's importance and power as a ruler. The statue was carved for the Pharaoh's valley temple near the Great Sphinx, a part of the necropolis (a funerary city) used in funeral rituals. This Old Kingdom statue has an important function in Egyptian tombs as substitute abodes for the Pharaoh's ka—the life force that accompanied a person with a kind of other self. After death, the ka leaves the body into the afterlife, but still needs a place to rest: the statue.


This sculpture, depicted in-the-round (versus relief sculpture) shows Khafre seated, one of the basic formulaic types used during the Old Kingdom to show the human figure. Mummification played a huge role in the Egyptian culture, a 70-day process to ensure immortality for the pharaoh. Starting in the 3rd millennium BCE, if the pharaoh's mummy was damaged, a ka statue was created to "ensure immortality and permanence of the deceased’s identity by providing a substitute dwelling place for the ka".


Khafre rigidly sits in his royal throne, gazing off into the distance. The pharaoh wears a linen nemes headdress, which cover most of his forehead and folds over his broad shoulders. This royal headdress depicts the uraeus, or cobra emblem, on the front along with the royal false beard attached at the end of his chiseled chin, all symbols which exemplify his royalty and divinity. Khafre wears a kilt covering his waist, revealing his idealized upper body and muscle definition. This depiction is not a portrait, but a symbol of Khafre's power through using the artistic conventions of Egypt—a flawless body, perfectly un-aged face, and ideal body proportions. The Egyptian idealized portraiture is not meant to record individualized features, but instead proclaim the divine nature of Egyptian kingship. Two stylized lions’ bodies form the throne Khafre sits on, creating a sturdy base. Lotus plants (symbolic of Upper Egypt) and papyrus plants (symbolic of Lower Egypt) grow between the legs of the throne, referring to the unification of Upper and Lower Egypt which ended the Egyptian Pre-Dynastic period. The god Horus, depicted as a falcon, protects the backside of Khafre's head with his wings, another reference to the united Egypt. Besides the striking view of the falcon (unseen from the front) resting behind Khafre's head, Khafre's feet are emplaced upon a flat platform, engraved with 9-archery bows, representing the king's and kingdom's dominance over foreign/domestic enemy tribes, the nine bows.


The symmetrical pharaoh shows no movement or change, suppressing all motion and time to create an eternal stillness; his strong build and permanent stance demonstrate no notion of time—Khafre is timeless, and his power will exist even in the afterlife. The pharaoh has an emotionless and ageless face, alluding to his non-chaotic, controlled empire and powerful leadership; the pharaoh has control over his domain. The statue is based upon compactness and solidity with few projecting parts; Khafre's block-like body is attached to the throne to last for eternity, creating one single structure. His arms rest on his thighs, directly facing the viewer in a rigid, frontal pose. The bilaterally symmetric statue, symbolizing order and control in the pharaoh, is the same on either side of the vertical axis of the statue, only differing in Khafre's clenched right fist. The tight profile and block-like aspect represent Khafre as a permanent being and part of the stone to keep his ka safe. Khafre will always exist, on earth and in the afterlife. The pharaoh's sculpture can be described as absolutely frontal, utterly immobile, and perfectly calm: the characteristics of Egyptian block statue.