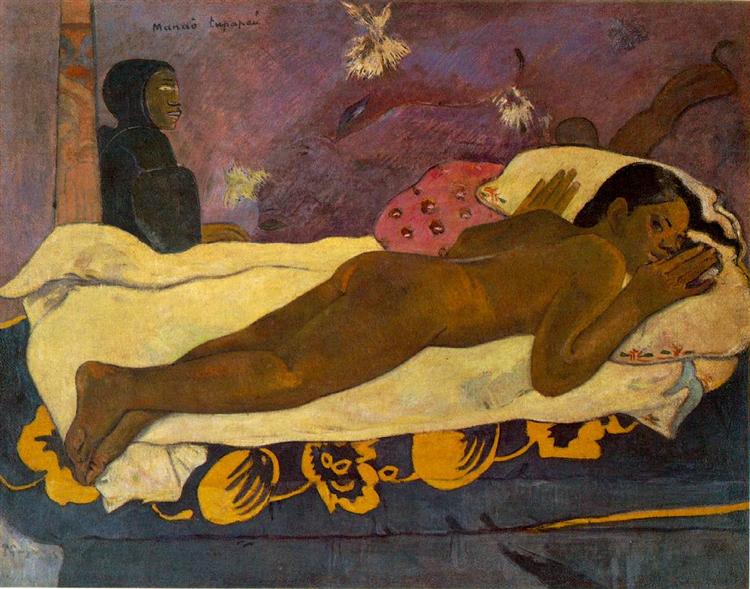 The Spirit of the Dead Watches

In 1891, Post-Impressionist artist Paul Gauguin left France to travel to the island of Tahiti. For Gauguin, the tropical island held the promise of a ‘primitive paradise’, that was free from the constraints of modern society. However, once he arrived, Gauguin realized that the place he envisioned did not exist: the island was dealing with the impacts of colonialism and modernity, and native customs and culture seemed to be headed towards extinction. In his art, he tried to reimagine this lost paradise and experience the native Polynesian culture and customs.

Spirit of the Dead Watching (Manaò Tupapaú) (1892) was one of the artist’s best-known works from hisfirst visit to Tahiti. The painting depicts a young Tahitian girl haunted by the Tupapaú, the Polynesian spirit of the dead. The girl in the painting was Teha’amana, Gauguin’s young lover, and ‘native-wife’. In his Tahiti journals Noa Noa, he described the incident that inspired the painting: “One day I had to go to Papeete… I had promised to return that very evening… It was one in the morning by the time I arrived… The lamp had gone out and when I came home the bedroom was dark. I felt a sort of fear… I struck some matches and saw [what I pictured in my painting Manaò] Tupapaú.” Frightened by the spirits, Teha’amana lies naked on her stomach rigid and tense while glancing sideways toward the viewer.

In Spirit of the Dead Watching Gauguin wanted to represent the Polynesian fear of the Tupapaú, who is depicted as an older woman wearing a black cloak. On the back wall, there are several white forms, that Gauguin described as phosphorescent lights, which symbolize the spirits that haunt the living. Gauguin depicted the figure of the Tupapaú in a similar fashion in the painting Parau na te Varua ino (Words of the Devil) (1892). In both cases, the artist juxtaposed the fearful nude figure with the Tupapaú: the Tupapaú is painted in cool tones that contrast the warm shades of the female nudes.

The painting also closely relates to Olympia (1863) by Édouard Manet, a painting Gauguin greatly admired and even took a photograph of it with him to Tahiti. In the same way that Manet’s Olympia represented a modern incarnation of Venus, Gauguin wanted to showcase his version of a native Venus. This connection was also established by Gauguin’s European contemporaries, the French writer Alfred Jarry called her ‘a brown Olympia’. Spirit of the Dead Watching was important to Gauguin, he made several versions of the motif in drawings and woodblocks and even featured it in the background of the painting Self-portrait in a Hat (1893).

As new discourses developed, Gauguin’s Spirit of the Dead Watching prompted new readings and interpretations. Gauguin described his relationship with then thirteen-year-old Teha’amana through the contrasts of youth and old age, of light and darkness and life and death. Given the fact that Gauguin was an older man in the position of taking advantage of his subject, the story behind Spirit of the Dead Watching can take on a different meaning. Did the spirits cause Teha’amana uneasiness or was she frightened by someone she sees beyond the picture plane?