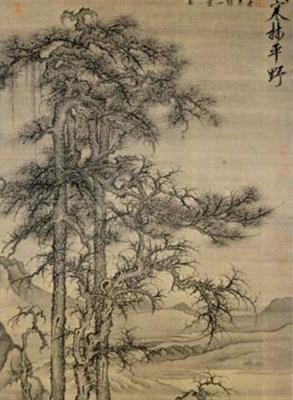 Li Cheng (Chinese: 李成; pinyin: Lǐ Chéng; Wade–Giles: Li Ch'eng; 919–967), Courtesy name Xiánxī (咸熙), was a Chinese painter from Qingzhou (now part of Weifang, Shandong) during the Five Dynasties and Ten Kingdoms and early Song Dynasty. His ancestral lineage was with the Tang Dynasty imperial family, the Li (李) family, which had fallen out of power in 907 with the collapse of the Tang Empire.

Li Cheng learned painting style from Jing Hao and Guan Tong at first but turned to focus on nature and developing his own style. He was also good at poetry and articles; but he did not pay much attention to that. He was not interested in working for the government. Many nobles wanted Li Cheng work for them, but Li Cheng never accepted. There was a prestige person named Sun always wanted to get a painting from Li Cheng. So he tried to offer Li Cheng a job in exchange for his painting. However, Li Cheng refused to do so. Sun then paid money to someone who knew Li Cheng and hoped him to steal a painting. After a while, Li Cheng saw his work hanging on Sun's wall; he was very angry and never contacted with the one who stole his painting. During his later years, he traveled around and died in Huaiyang County.

Li Cheng, Fan Kuan, and Guan Tong together became known as the "three great rival artists". He did many landscape paintings with diluted ink, known as "treating ink like gold", which gives the appearance of being in a foggy dream. At that time, he was considered the best landscape painter of all time. He was known to have carried on an artistic dialogue with Wu Daoxuan through their respective paintings. Li Cheng primarily portrayed Shandong area landscapes in his paintings. Artists of later generations, such as Guo Xi, modeled their teaching on his painting style and methods.

His works include “Jigger", "Joy in Fishing", "Cold crow", and "Landscape". One extant painting, "Reading Stele Nest Stone", was a collaboration between him and Wang Xiao.