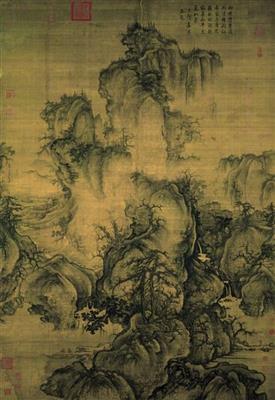 Guo Xi (Chinese: 郭熙; pinyin: Guō Xī; Wade–Giles: Kuo Hsi) (c. 1020 – c. 1090) was a Chinese landscape painter from Henan Province who lived during the Northern Song dynasty. One text entitled "The Lofty Message of Forest and Streams" (Linquan Gaozhi 林泉高致) is attributed to him. The work covers a variety of themes centered on the appropriate way of painting a landscape. He was a court professional, a literatus, well-educated painter who developed an incredibly detailed system of idiomatic brushstrokes which became important for later painters. One of his most famous works is Early Spring, dated 1072. The work demonstrates his innovative techniques for producing multiple perspectives which he called "the angle of totality." This type of visual representation is also called "Floating Perspective", a technique which displaces the static eye of the viewer and highlights the differences between Chinese and Western modes of spatial representation.

The following is an excerpt from his treatise, "mountains and waters":

Guo Xi was often referred to as a "Northern Song master" when it came to painting. His work inspired many later artists and he even had landscapes dedicated to him. His lesser-known "Deep Valley" scroll painting depicts a serene mountain valley covered with snow and several trees struggling to survive on precipitous cliffs. The ink washes and amorphous brush strokes are employed to model surfaces that suggest the veiling effects of the atmosphere. One of Guo Xi’s techniques was to layer ink washes to build up forms and his "Deep Valley" is a masterpiece of the use of light ink and magnificent composition.

His son later described how Guo Xi approached his work: "On days when he was going to paint, he would seat himself at a clean table, by a bright window, burning incense to right and left. He would choose the finest brushes, the most exquisite ink; wash his hands, and clean the ink-stone, as though he were expecting a visitor of rank. He waited till his mind was calm and undisturbed, and then began."