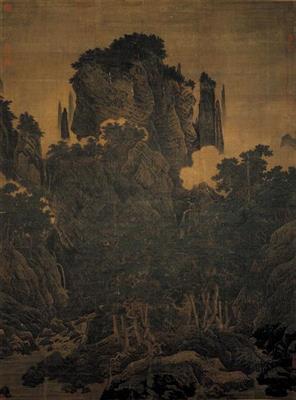 Wind in the Pines Among a Myriad Valleys - Li Tang

Li Tang was born ca. 1050, a native of Heyang. Already in his early years he earned his living by painting. Sometime after 1100, under Emperor Huizong, he earned the highest rank in the Painting Academy at the court in Bianjing (now Kaifeng).

He survived the invasion by the Jurchen Jin dynasty in 1126–27, and, together with the court, moved to Qiantang (now Hangzhou), which became the capital city of the newly established Southern Song Dynasty. He continued to serve as painter in the court under Emperor Gaozong, and died circa 1130.

Li was among the most influential of the early Southern Song landscape artists and had many followers. He represented a vital link between the Northern Song school (Guo Xi, Fan Kuan, Li Cheng, and others), and the later Southern Song painters, such as Xia Gui and Ma Yuan, both of whom studied Li's art. He developed and perfected the technique of the so-called "ax-cut" brushstrokes, which gave rocks and mountains a particularly fine quality.

As with most Song artists, few of his paintings survive, and most are of questionable authorship. The large hanging scroll Wind in Pines Among a Myriad Valleys (also known as Whispering Pines in the Mountains; National Palace Museum, Taipei, Taiwan) is the only painting that bears a clear signature by the artist, which is placed on one of the peaks in the top section. It reads: "Painted by Li Tang of Ho-yang in Spring of the chia-ch'en year of the Hsüan-ho Reign of the Great Song [Dynasty]." The texture of the rocks in this painting is a standard example of the "ax-cut" strokes technique.

Other works commonly attributed to Li Tang are Intimate Scenery of River and Mountains, a long landscape scroll, and Sitting on Rocks Gazing at the Mist, both in the possession of the National Palace Museum.