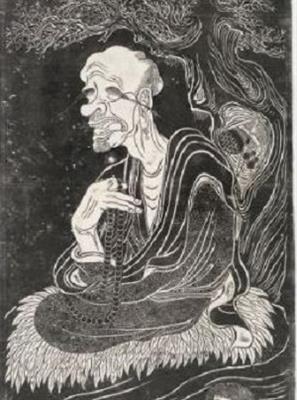 Guanxiu (Jiang Deyin or Deyuan, a Buddhist monk also named Master Chan Yue) -- painter during late Tang to Five Dynasties, specialized in painting lohan (arhat) figures. Legend has it that the first portraits of the 16 Lohans were painted by Guan Xiu, in 891 A.D.

According to records, it was because of his expert painting skill that the Lohans chose him to paint their portraits. They appeared to him in his dreams to make that request. Guan Xiu often said, "It was in a dream that I saw these Gods and Buddhas. After I woke up, I painted what I saw in the dream. So, I guess I can refer to these Arhats as 'Arhats in a dream.'" Guanxiu depicted lohans in the form of "those beyond this world"-- strangely eccentric. All 16 lohans have bushy eyebrows, large eyes, protruding cheekbones, a long nose, and an Indian or Central Asian countenance; thus it appears very different from that of native Chinese monks.

Guanxiu's Portraits of sixteen arhats in Shengyin Temple. It is recorded Guanxiu's 16 Lohans were given to a Buddhist monastery near Qiantang (currently Hangzhou) in the province of Zhejiang. These became famous and were preserved with great care and ceremonious respect. In the reign of Qianlong, Qing Dyansty (c. 1750) an official had copies made by competent artists and sent them to the emperor who had further copies made, printed and distributed. When it was found that names were incorrectly assigned, the emperor took care to see that the copies be compared with the originals and correctly transcribed. Sheng Yin Temple-- located near current Gushan (Solitary Hill) in Hangzhou, Zhejiang. The temple was destroyed during 1850-1864 by an opposition group called "Taipingtianguo" ("Heavenly Kingdom of Peace").

Guanxiu (simplified Chinese: 贯休; traditional Chinese: 貫休; pinyin: Guànxiū; Wade–Giles: Kuan-hsiu) was a celebrated Buddhist monk, painter, poet, and calligrapher. His greatest works date from the Five Dynasties and Ten Kingdoms period. The collapse of the central Tang government in 907, meant artists and craftsmen lost their most powerful patrons. The imperial tang court had inspired a golden age of literature and art at its apogee. The various provincial courts who claimed to represent a continuation of the tradition of Tang government also claimed continuity in the arts and culture. The state of the Former Shu had acted as the traditional western sanctuary ever since the Emperor Xuanzong had sought refuge there during the An Shi Rebellion in 755. By the collapse of the Tang Dynasty something like a miniature Tang court existed at Chengdu. Guanxiu arrived in chengdu in 901, and remained there until his death.

Wang Jian, the founding emperor of the Former Shu, bestowed upon him the honorific title Great Master of the Chan Moon (Chanyue dashi), however he is still known by his monk's name Guanxiu, which means "a string of blessings". He is famed for his depiction of arhats, disciples of historical Buddha, who lived harsh ascetic lives. He is however also known for his works in poetry and calligraphy as well; extroardinarily extant works exist for all three forms.

In particular Guanxiu is known for his depiction of the eighteen arhats particular to Chinese Buddhism. Chinese artists had been depicting them with great expressiveness and power since the sixth century, however Guanxiu's interpretations are often seen to have captured another dimension. A set of sixteen arhats is preserved in the Japanese Imperial Household Collection. This collection bears an inscription dated to 894. It states Guanxiu began the set while living in Lanxi, Zhejiang province.

Legend has it that the arhats, or "Luohans", knew of Guan Xiu's expert calligraphy and painting skills, and so appeared to the monk in a dream to request that he paint their portraits. The paintings depicted them as foreigners having bushy eyebrows, large eyes, hanging cheeks and high noses. They were seated in landscapes, leaning against pine trees and stones. An additional theme in these paintings were that they were portrayed as being unkempt and "eccentric" which emphasizes that they are vagabonds and beggars who have left all worldly desires behind. When Guan Xiu was asked how he came up with the depictions, he answered: "It was in a dream that I saw these Gods and Buddhas. After I woke up, I painted what I saw in the dream. So, I guess I can refer to these Luohans as 'Luohans in a dream'." These portraits painted by Guan Xiu has become the definitive images for the 18 Luohans in Chinese Buddhist iconography, although in modern depiction they bear more Sinitic features and at the same time lost their exaggerated foreign features in exchange for more exaggerated expressions. The paintings were donated by Guan Xiu to the Shengyin Temple in Qiantang (present day Hangzhou) where they are preserved with great care and ceremonious respect.