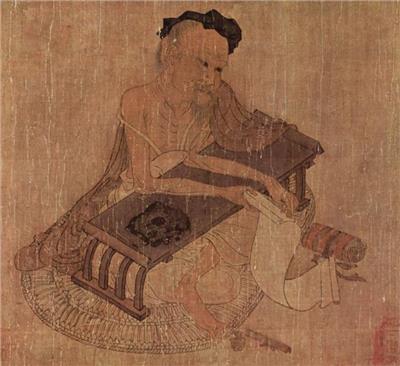 Wang Wei (Chinese: 王維; 699–759) was a Tang dynasty Chinese poet, musician, painter, and statesman. He was one of the most famous men of arts and letters of his time. Many of his poems are preserved, and twenty-nine were included in the highly influential 18th-century anthology Three Hundred Tang Poems.

His family name was Wang, his given name Wei. Wang chose the courtesy name Mojie, and would sign his works Wang Weimojie because Wei-mo-jie was a reference to Vimalakirti, the central figure of the Buddhist sutra by that name. In this holy book of Buddhism, which is partly in the form of a debate with Mañjuśrī (the Bodhisattva of Wisdom), a lay person, Vimalakīrti, expounds the doctrine of Śūnyatā, or emptiness, to an assembly which includes arhats and bodhisattvas, and then culminates with the wordless teaching of silence.

Wang Wei is especially known as a poet and painter of nature. Of his poems some four hundred survive: these were first collected and originally edited into a corpus by his next-youngest brother, Wang Jin, by imperial command. Of his paintings, no authenticated specimens survive, although there is evidence of his work through influences on later paintings and descriptive accounts of his paintings. His musical talents were regarded very highly, although nothing survives of his music except reports. He furthermore had a successful career as a court official. Eventually, he became a devout Zen Buddhist and a vegetarian. Wang Wei spent ten years studying with Chán master Daoguang.

Born into an aristocratic family, of Han ethnicity, originally from Qixian (present-day Qi County in Shanxi province), Wang Wei's father moved east of the Yellow River to Puzhou, part of the historic Hedong Commandery (today's Yongji, Shanxi). Known for his youthful precocity, Wang Wei, the eldest of five brothers, set off for the imperial capital at the age of nineteen, in order to study and take the jinshi civil service entrance examination. In the period while residing in Chang'an, before taking the test, Wang's proficiency at poetry and his musical proficiency with the pipa helped him to achieve popularity at the royal court. He passed the jinshi examination, in 721, with the first class award (Zhuangyuan), which started his potentially lucrative civil service career. Wang Wei's career as an official had its ups and downs. His first appointment was as a court musician, or "Deputy Master of Music"; however, he was then demoted to a position of being in charge of a granary in the former province of Jizhou (now the name of a different town Jizhou, in Hebei). The reason for this demotion, according to tradition, was Wang's breach of etiquette by performing a lion dance. In any case, this was only a minor setback to his career, and it had a compensation in that it did allow him to travel. Then, a series of promotions following this demotion was apparently attributable to a relationship with the prominent governmental minister, poet, and literary scholar Zhang Jiuling, at least until Zhang's 727 demotion to a post in Jingzhou. By 728, Wang Wei was back in Chang'an, where he entertained the poet Meng Haoran, who was to become a close friend and poetic colleague. At this point, Wang seems to have achieved the rank of Assistant Censor, and then a subsequent governmental promotion, but then later being demoted back to Assistant Censor, with the loss in imperial favor of Zhang Jiuling and the rising political ascendency of Li Linfu. After his wife's death in 731, he never remarried. It was in his role as a government official that Wang Wei was dispatched to Liangzhou, which was then the northwestern frontier of the Chinese empire, and the scene of constant military conflicts. By invitation of the local commander, Wang served in this location until returning to Chang'an in 738 or early 739.