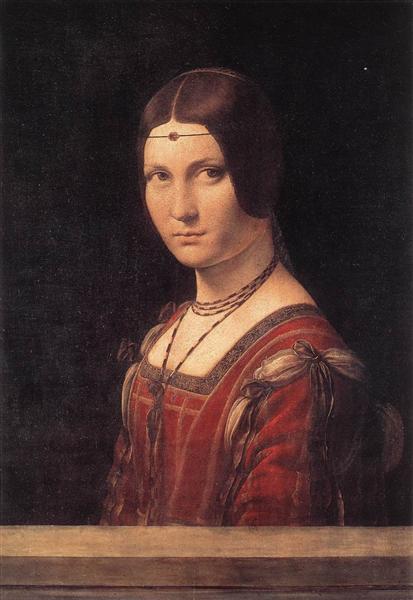 La belle ferronnière is a portrait of a lady, usually attributed to Leonardo da Vinci, in the Louvre. It is also known as Portrait of an Unknown Woman. The painting's title, applied as early as the seventeenth century, identifying the sitter as the wife or daughter of an ironmonger (a ferronnier), was said to be discreetly alluding to a reputed mistress of Francis I of France, married to a certain Le Ferron. The tale is a romantic legend of revenge in which the aggrieved husband intentionally infects himself with syphilis, which he passes to the king through infecting his wife.

Leonardo's Lady with an Ermine, has also been known by this name. This was once believed to be a portrait of Cecilia Gallerani—one of the mistresses of Lodovico 'il Moro' Sforza, Duke of Milan. The narrative and the title were applied to Lady with an Ermine when it was in Princess Czartoryski's collection, and became confused with "La Belle Ferronniere" by the presence in this image also of a jewel worn on a delicate chain across the forehead, called a ferronnière.

Although the model of the painting "La Belle Ferronniere" is still shrouded in mystery, the landmark exhibition "Leonardo Da Vinci: Painter at the Court of Milan" (National Gallery, London, 9 Nov. 2011 – 5 Feb. 2012) listed the portrait as possibly depicting Beatrice d'Este, wife of Ludovico Sforza. This challenges the portrait's earlier attribution to Lucrezia Crivelli, a mistress of Ludovico.

Bernard Berenson attributed this portrait to Bernardino de' Conti. Giovanni Antonio Boltraffio was suggested by Herbert Cook, who retracted his opinion, seeing Leonardo's own hand, in 1904.

A later version of the painting, on canvas, had been offered to the Kansas City Art Institute as the original, but was identified as a copy, on the basis of a photograph, by Sir Joseph Duveen, who permitted his remarks to be published in the New York World in 1920; the owner, Mrs Andrée Lardoux Hahn, sued for defamation of property in a notorious court case, which involved many of the major connoisseurs of the day, inspecting the two paintings side by side at the Louvre; the case was eventually heard in New York before a jury selected for not knowing anything of Leonardo or Morellian connoisseurship, and settled for $60,000 plus court expenses, which were considerable. The owner's account, Harry Hahn's The Rape of La Belle (1946) is a classic of populist conspiracy theory applied to the art world. After decades in an Omaha vault, the Hahn La Belle was sold at auction by Sotheby's on January 28, 2010 as "by a follower of Leonardo, probably before 1750"; it brought 1.5 million dollars, a price three times higher than Sotheby's pre-sale estimate. The buyer was an unidentified American collector.

A 19th-century copy of La Belle Ferronnière is conserved in the Musée des beaux-arts, Chambéry. The Louvre painting is identified in pre-Revolutionary inventories of the French royal collection.