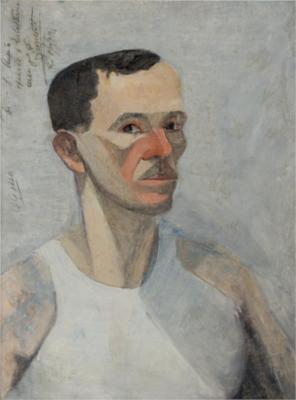 Born into a humble family of immigrants from Tuscany, Italy. he lived in Campinas until he was 10 years old, when his father, a master carpenter, moved with his wife and children to the state capital, São Paulo, where he hoped to find better working conditions. One year later, José and one of his sisters moved to Italy, to live under the care of an uncle and grandparents.

Arriving at the house of his uncle Casimiro, he started to study at the Salesian College in Massa-Carrara. But shortly thereafter, the country would be involved in World War I and Pancetti had to be moved to the countryside, home of his grandparents in the town of Pietrasanta.

There, he learned the craft of a carpenter in a small workshop. But he didn't like the routine of the job and thus went to work, always briefly, in some factories until the conflict ended.

Wishing to fix a better job for José, his uncle arranged for him to be a sailor in the Italian merchant navy, where he learned the seafaring profession. He boarded the "Maria Rosa" sailboat, which ran trips throughout the Mediterranean, especially between the ports of Genoa and Alexandria. But the fickleness of his character caused him to leave the ship and to go wandering the streets of Genoa, with serious problems of subsistence, until someone took him to the Brazilian consulate, which provided for his return to Brazil.

Thus, on February 12, 1920, he landed in Santos. To survive, he worked in different places and different crafts until, in 1921, he moved to São Paulo again, where a businessman, also of Italian origin, offered him a job as a painter of walls and posters, which seems to have been his first contact with painting.

In that same year, the painter Adolfo Fonzari offered to Pancetti an opportunity to assist him in decorating the house of another Italian in the coast of Guarujá.

Aboard the Navy ships, Pancetti was given the task of painting hulls, walls, etc. He did this with such a zeal that his fame spread throughout the Navy until an admiral created a cadre of experts in the profession and appointed Pancetti as its first teacher of painting. But being a wall painter became boring and upon the humble sailor dawned a desire to put into paper what his eyes saw. And so Pancetti began to draw and to paint postcards with landscapes, seascapes and romantic sceneries, still quite clumsy, but which already showed his considerable artistic potential.

During the São Paulo Constitutional Revolution of 1932, Pancetti watched and painted a scene depicting a warplane downed by machine guns of the cruiser "Rio Grande do Sul" on board of which he was. The painting was acquired and published by the weekly "Noite Ilustrada", and that how he was professionally started in the fine arts.