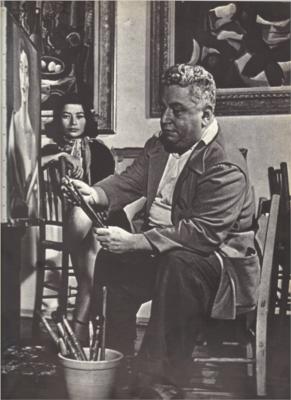 Emiliano Augusto Cavalcanti de Albuquerque Melo (September 6, 1897 – October 26, 1976), known as Di Cavalcanti, was a Brazilian painter who sought to produce a form of Brazilian art free of any noticeable European influences. His wife was the painter Noêmia Mourão, who would be an inspiration in his works in the later 1930s.

Born in Rio de Janeiro in 1897, Di Cavalcanti was influenced by the intellectuals he met at his home of his maternal uncle, a figure of the abolitionist movement. This would provide the basis for a lifelong politically driven artistic career, which would start by the production of a drawing published by the magazine fon-fon. He engaged in a pursuit for a Law degree in São Paulo but did not manage to complete this pursuit. Di Cavalcanti moved to São Paulo in 1917. At this time he held his first exhibition at the Editora do Livro (o livro bookstore) in São Paulo. This first exhibition would only include caricatures with very viable symbolist influences to be found presented in the works.

In 1918, Di Cavalcanti would become part of a group of intellectuals and artists in São Paulo which would contain artist like Oswald de Andrade, Mário de Andrade, Guilherme de Almeida, etc. This group would be the direct cause for bringing the Semana de Arte (week of modern art) in life in 1922 (see the cover page on the right of this page). This movement along with the Group of Five wished to revive the artistic environment in São Paulo at the time and had as its main interest to free Brazilian art from the European influences found within it. Nevertheless, the works Di Cavalcanti displayed at the Semana revealed varying Symbolist, Expressionist, and Impressionist influences. This can thus be seen as a continuance of European stylistic influences and this would not change until Di Cavalcanti returned from Paris in 1925 to live in Rio de Janeiro once again.

Di Cavalcanti lived in Paris and Montparnasse from 1923 until 1925. During this time he was employed as a correspondent for the newspaper Correio da Manhã and attended classes at the Académie Ranson in Paris, which led him to meet European modernists like Pablo Picasso, Henri Matisse, Georges Braque, and Fernand Léger. During this time his feelings to create a true Brazilian art would flourish and thus lead to his later works.

After returning from Europe and having experienced the modernist movement in Europe Di Cavalcanti would start working on a more Brazilian art, which Di Cavalcanti and the group who held the Semana de Arte already advocated in 1922. During this time he joined the Brazilian Communist Party due to the heightened nationalistic feelings he experienced during three years abroad. Di Cavalcanti embodies the problematic tendency of Brazilian modernists to be pulled in two directions: his subject matter consists of particularly Brazilian themes (mostly mulatto women), but his chief artistic influences are the European modernists and Pablo Picasso most of all.