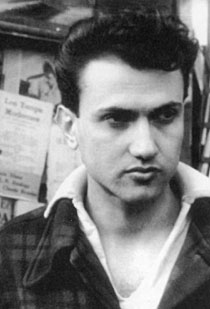 Isidore Isou born Ioan-Isidor Goldstein, was a Romanian-born French poet, film critic and visual artist. He was the founder of Lettrism, an art and literary movement which owed inspiration to Dada and Surrealism.

Born into a Jewish family in Botoşani, Isou started his career as an avant-garde art journalist during World War II, shortly after the August 23 coup saw Romania joining the Allies (see Romania during World War II). With the future social psychologist Serge Moscovici, he founded the magazine Da, which was soon after closed down by the authorities. He moved to Paris, having developed many concepts that intended as a total artistic renewing starting from their lower levels. He called himself a Lettriste, a movement of which he was initially the only member (at the age of 16 he had published the Manifesto in 1942) and published a system of Lettrist hypergraphics. Others soon joined him, and the movement continues to grow, albeit at times under a confusing number of different names.

In the 1960s Lettrist, Lettrist-influenced works and Isidore Isou gained a great deal of respect in France. The influential writer Guy Debord and the artist Gil J. Wolman worked with Isou for a while, before breaking away to form the Lettrist International, which latter merged with the International Movement for an Imaginist Bauhaus, and the London Psychogeographical Association to form the Situationist International, a dissident revolutionary group. This is how Lettrist art influenced the posters, barricades, even clothing in the attempted revolution of 1968. Although it seemed a highly self-contained art in the post-war period, in 1968 it suddenly became more deeply involved in active social change than such movements as Existentialism and Surrealism, and came closer to producing actual transformation than these movements.

Isou's final public appearance was at the University of Paris on October 21, 2000. Crippled by ill health, he remained house-bound until his death in 2007. Many of his works, and those of the other Lettrists, have recently been reprinted in new editions, together with much hitherto unpublished material, most notably Isou's very large La Créatique ou la Novatique (1941-1976) (1,390 pages).

Isidore Isou (French: [izu]; 29 January 1925 – 28 July 2007), born Jean-Isidor Goldstein, was a Romanian-born French poet, dramaturge, novelist, economist, and visual artist who lived in the 20th century. He was the founder of Lettrism, an art and literary movement which owed inspiration to Dada and Surrealism

Born into a Jewish family in Botoşani, Isidore Goldstein began his literary career as an avant-garde art journalist during World War II, shortly after the 23 August coup saw Romania joining the Allies (see Romania during World War II). With the future social psychologist Serge Moscovici, he founded the magazine Da, which was soon after closed down by the authorities. At age 13 he read Dostoyevski, and soon afterward Karl Marx and Marcel Proust. Prior to his clandestine migration to Paris with a suitcase full of early manuscripts in August, 1945, he had already developed many of the key concepts which played a role his later work. Intending a total artistic renewal starting from the most basic elements of writing and visual communication, he soon began publishing and exhibiting under the pseudonym "Isidore Isou". On the eighth of January, 1946 Isidore Isou organized the first Lettriste manifestation in Paris along with Gabriel Pommerand, his principle disciple at that time. With the help of Jean Paulhan and Raymond Queneau, who placed his work in La Nouvelle Revue in April, 1947, and the scandal that broke out at Theatre du Vieux-Colombier where he staged a performance, he came to the attention of Gaston Gallimard, who then accepted his memoire "L'Agrégation d'un Nom et d'un Messie" for publication.

In 1949, the young Isou published the novel Isou ou la mécanique des femmes, inspired by his obsessions with the 16 year old muse and later conceptual artist Rhea Sue Sanders, (born 1932, author of GOD, a text piece). This book was banned by the authorities on 9 May 1950 and Isou was sentenced to prison for eight months (his sentence was suspended), a fine of 2000 francs was imposed along with the destruction of all copies of a book which 1950's French jurisprudence considered completely obscene.

In 1951, Isou released his experimental and revolutionary film Traité de bave et d'éternité (Treatise on Venom And Eternity), work deemed revolting by many critics present at the premiere. It was, nonetheless, celebrated by Jean Cocteau and its effect on young film makers was profound, if not immediate. The chaotic reception ensuing the film's showing at Cannes brought Guy Debord back into the Lettriste group for a short period prior to 1952. Including a reflexive discourse on the making of a new cinema, Isou's film became a virtual Lettriste manifesto. Attacking many of the current film conventions by chiseling away at them in his film, Isou introduced the concept of "discrepancy cinema," one where the sound track has little or nothing to do with accompanying images. The sound track of Treatise on Venom and Eternity begins with jarring and unpleasant human noises and chants which continue in low volume throughout the film's spoken dialogue. In addition, the celluloid on which the film was recorded was attacked with destructive techniques such as scratches and bleaching. Isou also employed techniques that pre-date and suggest the oncoming emergence of a concept based form of film making. Following the showing's scandal at the 1951 Cannes Film Festival, it was later imported into the United States, where it influenced avant-garde film makers such as Stan Brakhage, who corresponded with Isou directly afterward and let it change his approach to the medium and to narrative entirely. In the early fifties one segment of Orson Welles' film journal, which was entitled Le Letrrisme est la Poesie en Vogue, included an interview with Isou and Maurice Lemaitre.