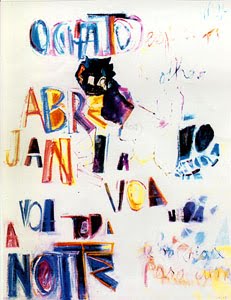 Lettrism is a French avant-garde movement, established in Paris in the mid-1940s by Romanian immigrant Isidore Isou. In a body of work totaling hundreds of volumes, Isou and the Lettrists have applied their theories to all areas of art and culture, most notably in poetry, film, painting and political theory. The movement has its theoretical roots in Dada and Surrealism. Isou viewed his fellow countryman, Tristan Tzara, as the greatest creator and rightful leader of the Dada movement, and dismissed most of the others as plagiarists and falsifiers. Among the Surrealists, André Breton was a significant influence, but Isou was dissatisfied by what he saw as the stagnation and theoretical bankruptcy of the movement as it stood in the 1940s.

In French, the movement is called Lettrisme, from the French word for letter, arising from the fact that many of their early works centred on letters and other visual or spoken symbols. The Lettristes themselves prefer the spelling 'Letterism' for the Anglicised term, and this is the form that is used on those rare occasions when they produce or supervise English translations of their writings: however, 'Lettrism' is at least as common in English usage. The term, having been the original name that was first given to the group, has lingered as a blanket term to cover all of their activities, even as many of these have moved away from any connection to letters. But other names have also been introduced, either for the group as a whole or for its activities in specific domains, such as 'the Isouian movement', 'youth uprising', 'hypergraphics', 'creatics', 'infinitesimal art' and 'excoördism'.

1925. Isidore Goldstein is born at Botoşani, Romania, on January 31, to an Ashkenazi Jewish family. During the early 1950s, Goldstein would be signing himself 'Jean-Isidore Isou'; otherwise, it has always been 'Isidore Isou'. 'Isou' is standardly taken to be a pseudonym, but Isou/Goldstein himself resists this interpretation.

General continuation of existing currents, together with new research into psychiatry, mathematics, physics, and chemistry.

Other members to join the lettrism during the seventies : Woody Roehmer, Anne-Catherine Caron, and during the eighties : Frédérique Devaux, Michel Amarger...

Development of excoordism. Uncomfortable with the direction the group is going in, Lemaître—Isou's right-hand man for nearly half a century—begins to distance himself from it. He still continues to pursue traditional Letterist techniques, but now in relative isolation from the main group.

Isou first discovered these phases through an examination of the history of poetry, but the conceptual apparatus he developed could very easily be applied to most other branches of art and culture. In poetry, he felt that the first amplic phase had been initiated by Homer. In effect, Homer set out a blueprint for what a poem ought to be like. Subsequent poets then developed this blueprint, investigating by means of their work all of the different things that could be done within the Homeric parameters. Eventually, however, everything that could be done within that approach had been done. In poetry, Isou felt that this point was reached with Victor Hugo (and in painting with Eugène Delacroix, in music with Richard Wagner.). When amplic poetry had been completed, there was simply nothing to be gained by continuing to produce works constructed according to the old model. There would no longer be any genuine creativity or innovation involved, and hence no aesthetic value. This then inaugurated a chiselling phase in the art. Whereas the form had formerly been used as a tool to express things outside its own domain—events, feelings, etc.--it would then turn in on itself and become, perhaps only implicitly, its own subject matter. From Charles Baudelaire to Tristan Tzara (as, in painting, from Manet to Kandinsky; or, in music, from Debussy to Luigi Russolo), subsequent poets would deconstruct the grand edifice of poetry that had been developed over the centuries according to the Homeric model. Finally, when this process of deconstruction had been completed, it would then be time for a new amplic phase to commence. Isou saw himself as the man to show the way. He would take the rubble that remained after the old forms had been shattered, and lay out a new blueprint for reutilising these most basic elements in a radically new way, utterly unlike the poetry of the preceding amplic phase. Isou identified the most basic elements of poetic creation as letters—i.e. uninterpreted visual symbols and acoustic sounds—and he set out the parameters for new ways of recombining these ingredients in the name of new aesthetic goals.