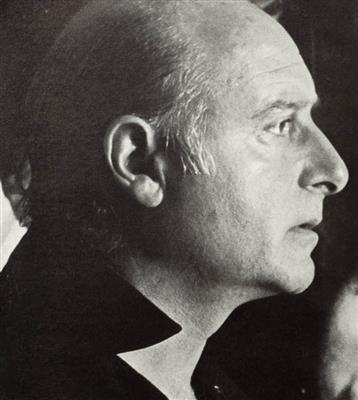 Domenico "Mimmo" Rotella, (Catanzaro, 7 October 1918 – Milan, 8 January 2006), was an Italian artist considered an important figure in post-war European art. Best known for his works of décollage and psychogeographics, made from torn advertising posters. He was associated to the Ultra-Lettrists an offshoot of Lettrism and later was a member of the Nouveau Réalisme, founded in 1960 by the art critic Pierre Restany.

After finishing school studies he moves to Naples in 1933 to pursue his artistic studies, but he got a job at the Ministry of Posts and Telecommunications. In 1941, he moved to Rome. He remains in the capital only for a short period, because he is called up. In 1944 he left the army and he graduated from the Art School of Naples. Between 1944 and 1945 he teaches drawing in Catanzaro. In 1945 he returned to Rome and, following his figurative beginnings and first experimentations, he began to paint new-geometric paintings. He starts in 1947 to participate at the exhibition, with the Exhibition Board of Fine Arts and the annual Art Club. In 1949 he devoted himself to the phonetic poetry experiments, calling epistaltic (a meaningless neologism), which in the same year he draws up the Manifesto (published by L.Sinisgalli in "Civilization of machines")

In 1951 he had his first contact with French art, exhibiting in Paris at the Salon des Nouvelles Réalités. Between 1951 and 1952, he obtained the award of a scholarship from the Fulbright Foundation, which allows him to travel to the US as an "Artist in Residence" at the University of Kansas City. Also in 1952 he realized the second personal exhibithion at the Rockhill Nelson Gallery in Kansas City. In the United States he had the opportunity to meet representatives of the new artistic currents: Robert Rauschenberg, Claes Oldenburg, Cy Twombly, Jackson Pollock and Yves Klein.

In 1953, he suffers from an artistic crisis, during which interrupts his pictorial production. Now convinced that there is nothing to be done again in art, suddenly what he calls "Zen illumination": the discovery of the advertising poster as artistic expression of the city. Thus the décollage (early collages) was born: paste on canvas pieces of torn posters of the street, by adopting the collages of the cubists and contaminating it with Dadaist array of ready made. In 1955, in Rome, in the exhibition "actual art exhibition", he exhibited for the first time the 'torn poster'. Later, he practiced the so-called double décollage: the poster firstly removed from the billboard, then torn up in his studio. In those years he also made use of the retro d'affiche, using the posters pasted on the side and obtaining non-figurative and monochrome works.

The first awards arrive in 1956 with the Graziano Award and in 1957 with the Battistoni Prize and Public Education. With the Cinecittà series of 1958, select figures and faces of film advertising directing production toward more figurative works. At the end of the Fifties, Rotella, is labeled by critics as a ripper or painter of glued paper. At night, tearing not only posters but also pieces of sheet metal from frames of the billboard zones of the Rome Municipality. In 1958 he receives in Rome the visit of the French critic Pierre Restany, with whom he began a long association. In the same year he participated in Rome in the exhibition "New Italian art trends" organized by Lionello Venturi in the seat of Rome - New York Art Foundation. The curiosity of the public for the artist's extravagances, culminated in 1960 with the creation, the work of Enzo Nasso, a short film dedicated to angry Painters, which cure Rotella spoken commentary.