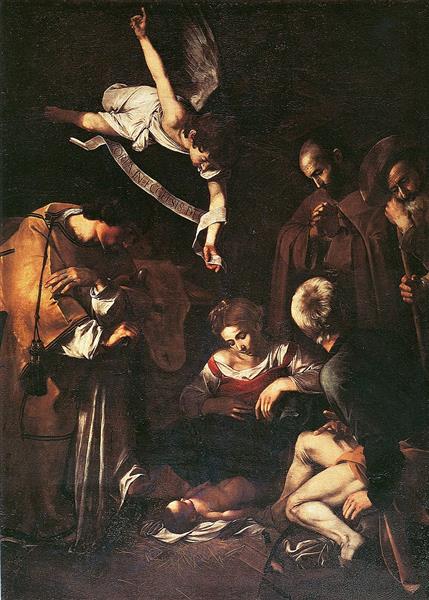 The Nativity with St. Francis and St. Lawrence (also known as The Adoration) is a painting believed to have been created in 1609 by the Italian Baroque master Caravaggio. Recent discoveries link the painting to that commissioned by Fabio Nuti in April 1600, and thus sent from Rome to Palermo.

It was stolen on October 18, 1969 from the Oratorio di San Lorenzo in Palermo, Sicily.

The painting, which hung above the altar, was large, measuring almost six square metres (actual size 268 cm x 197 cm). Probably because of its size, it was removed from its frame by the thief or thieves (two suspected) before being taken out of the church. After it was stolen, the Oratory was pillaged of other art, along with choir stalls of carved and gilded wood and benches inlaid with precious woods and mother of pearl.

The local Sicilian Mafia are generally considered to be the prime culprits in the theft although nobody actually knows who committed the crime. The whereabouts of the work remain unknown to this day. Rumours of its destruction during the theft, or subsequently in the 1980 Irpinia earthquake, have circulated from time to time as has the notion that the masterpiece is now hidden abroad. In 1996, Francesco Marino Mannoia, an informant and former member of the Sicilian Mafia, claimed he had stolen the painting as a young man on the orders of a high-ranking mobster, but other sources say it was stolen by amateurs and then sold on to various Mafiosi; at one point it is said to have ended up in the hands of Rosario Riccobono, who was killed in 1982, after which it passed on to Gerlando Alberti. In 2009, Gaspare Spatuzza, a former Mafia figure turned police informer, claimed that he was told in 1999 that the painting was stolen for a private collector but had been destroyed by rats and pigs while hidden in a farm outbuilding and the remains burned.

The Nativity is one of the most famous unrecovered stolen works of art; its theft is on the FBI's top ten list of art crimes. The value, if the work was ever sold, is estimated to be $20 million; though resale value on the black market, especially for an infamous work of art, is nowhere near the actual value. On the black market, stolen art fetches perhaps a tenth of its estimated value if it can even be sold at all.

In 2016, a reproduction of the painting was produced by Factum Arte for a documentary on the painting and its theft. This reproduction was then permanently installed in the chapel, in the place of the original.

Media related to Nativity with St. Francis and St. Lawrence by Caravaggio at Wikimedia Commons