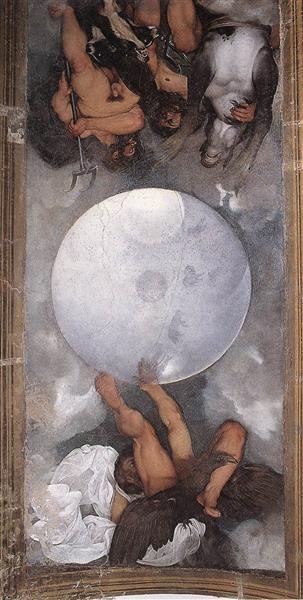 Jupiter, Neptune and Pluto (c. 1597) is a painting by Italian Baroque master Michelangelo Merisi da Caravaggio. It is located in the Villa Aurora, the former hunting lodge of the erstwhile Villa Ludovisi, Rome. It is unusually painted in oils on plaster. and hence it is not a fresco, although it is sometimes (incorrectly) referred to as such. Oil painting is normally on canvas or, less frequently, on wood.

According to an early biographer, one of Caravaggio's aims was to discredit critics who claimed that he had no grasp of perspective. The three figures demonstrate the most dramatic foreshortening imaginable. They contradict claims that Caravaggio always painted from live models. The artist seems to have used his own face for all three gods.

The painting was done for Caravaggio's patron Cardinal Francesco Maria Del Monte and painted on the ceiling of the cardinal's garden casino of his country estate, which later became known as the Villa Ludovisi. The cardinal had a keen interest alchemy. Caravaggio has painted an allegory of the alchemical triad of Paracelsus: Jupiter stands for sulphur and air, Neptune for mercury and water, and Pluto for salt and earth. Each figure is identified by his beast: Jupiter by the eagle, Neptune by the hippocamp, and Pluto by the three-headed dog Cerberus. Jupiter is reaching out to move the celestial sphere in which the Sun revolves around the Earth. Galileo was a friend of Del Monte but had yet to make his mark on cosmology.

The Villa Aurora is private property in the hands of the Ludovisi family and can be visited upon request.