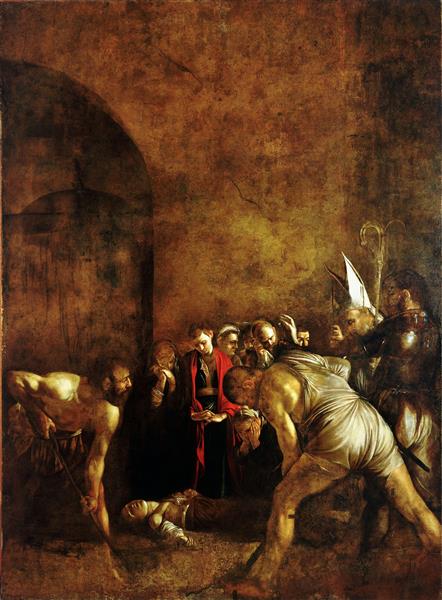 Burial of Saint Lucy is a painting by the Italian artist Caravaggio. It is located in the church of Santa Lucia alla Badia located on the Piazza Duomo in Syracuse, Sicily.

According to The Golden Legend, Saint Lucy had bestowed her wealth on the poor, in gratitude for the miraculous healing of her mother. Denounced as a Christian, she refused to recant, offered her chastity to Christ, and was sentenced to be dragged to a brothel. Miraculously, nothing could move her from the spot where she stood. She was pierced by a knife in the throat and, where she fell, the church of Santa Lucia al Sepolcro in Syracuse was built.

Caravaggio had escaped from prison on Malta in 1608, fleeing to Syracuse. There his Roman companion Mario Minniti helped him get a commission for the present altarpiece. Caravaggio painted it in 1608, for the Franciscan church of Santa Lucia al Sepolcro. The choice of subject was driven by the fact that St. Lucy was the patron saint of Syracuse and had been interred below the church. The subject was unusual, but especially important to the local authorities, who were eager to reinforce the local cult of St. Lucy, which had sustained a setback with the theft of her remains during the Middle Ages.