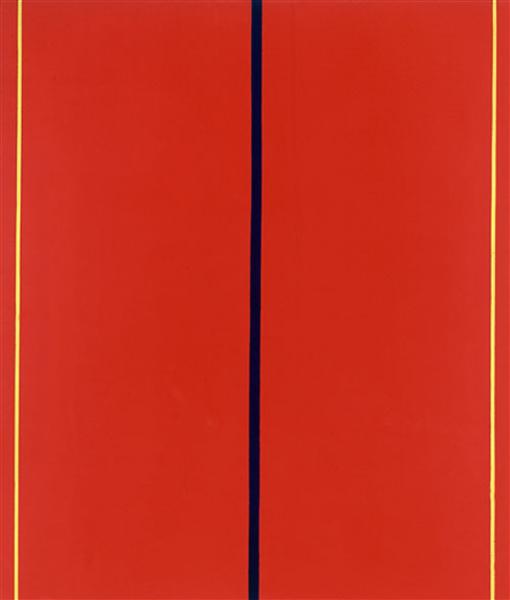 Barnett Newman’s series, Who’s Afraid of Red, Yellow and Blue? (1966-1970) exemplifies the emancipation of color. In this case, the color is the subject, it does not represent anything, it only expresses itself. The series consists of four large scale paintings tied together through the use of primary colors. The title, that references Edward Albee’s play, Who’s Afraid of Virginia Woolf, further reinforces the color as the subject matter. The title also relates to the idea of fear. The paintings are almost intimidating due to their overwhelming size (the largest canvas measures at 274x603 cm) and bold application of color. This is additionally amplified by the bright red color fields that dominate the canvases.

In the series, Newman opened a dialogue with both the older and the younger generation of abstract painters. In his use of primary colors he challenged the ideas of his predecessors, the representatives of Neoplasticism, particularly Piet Mondrian. Mondrian reduced all elements in nature to verticals, horizontals and a palette of primary colors. Through this form of abstraction, Mondrian believed that his paintings displayed the physical world in its essential form. Newman often criticized this approach for being absolute and systematic. Specifically, in terms of color he felt that it limited the artist to a predetermined color system. Newman’s approach to color was more intuitive, and was not limited in terms of color tones. Newman used a single primary color in some paintings, such as the red color field in Vic Heroicus Sublimis (1950-1951). However, like many abstract expressionists, he did not combine all three primary colors in a single painting prior to the 1960s. Through the series Who’s Afraid, Newman answered the question posed in the title. He embraces primary colors, but the intention is to emphasize the difference between the two approaches. In Mondrian’s case, the primary colors represent the essence of the elements in the natural world. By contrast, Newman applies the paint in order to showcase and express the qualities of the color itself.

In that stage of his career, Newman was a veteran abstract expressionist that influenced a younger generation of painters. At the same time, he was also aware of new approaches and trends developed by the new generation. Younger artists, such as Frank Stella and Ellsworth Kelly had a straightforward approach to color, they applied paint to the canvas directly without mixing them. In some instances, the colors had a superficial quality, which lacked the spiritual and emotional impact expressed in Newman’s color field paintings. However, there is one element where Newman was possibly influenced by the younger generation. The title was always an important element in Newman’s art, but he rarely referenced colors in his titles. This was common among artists like Ellsworth Kelly. It is possible that in emulating this, Newman wanted to show that he was aware of the latest trends in art. By engaging with his predecessors and his successors, Newman clarified his own position, ideas and artistic identity. Given the late stage of his career, it is plausible that Newman viewed Who’s Afraid of Red, Yellow and Blue? as an opportunity to reaffirm his legacy and place in art history.