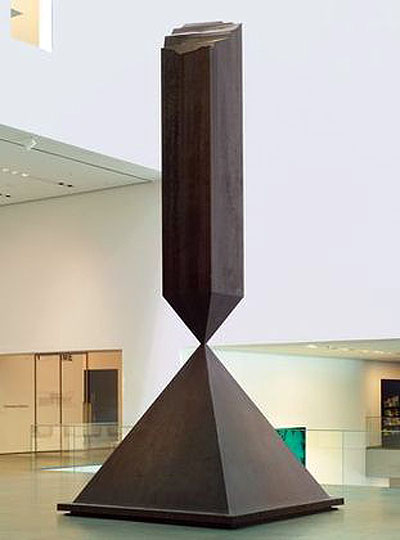 Even though Barnett Newman is principally known for his paintings, one of his most acclaimed artworks is the monumental sculpture Broken Obelisk (1963-1967). The sculpture encompasses the ideas that Newman dealt with throughout his career, mainly the pursuit and expression of ‘the sublime’. The meaning of the sculpture relates to broader concepts associated with the World-War II generation. The artists of this generation witnessed some of the greatest atrocities and instances of human destruction, such as the Holocaust and the atomic bombings of Hiroshima and Nagasaki. At the same time, there was sense that in living through these circumstances, life had triumphed over death, and the human spirit had triumphed over suffering.

Newman and his contemporaries created art that responded to the experiences of the 1940s, and their artworks often symbolized death, survival and rebirth. In Newman’s case, Broken Obelisk expresses these ideas in a concise and complete way, but these ideas can also be found in other artworks. For example, his series Stations of the Cross: Lema Sabachthani (1958-1966) references the agony of Jesus and the crucifixion. Newman translates the religious content of death and rebirth to the secular world. The progression of the series of paintings, expresses the ability to transcend suffering through the process of self-awareness.

The sculpture is influenced by ancient Egyptian monuments. Although the artist uses ancient language, the sculpture manages to attain a modern spirit. At the base of the sculpture is a pyramid, and from the top of the pyramid ascends an inverted obelisk. The sculpture has a dramatic visual impact, as it seems to defy the laws of physics. Newman achieved this by placing a hidden steel rod at the body of the sculpture that stabilized the structure. The pyramids of ancient Egypt were symbols of death since they were tombs for the pharaohs and their spouses. The obelisk symbolized the sun god Ra, and the tall column can be interpreted as materialization of a sun ray. The pairing creates a contrast between the obelisk, a symbol of infinite energy and sunlight, and the pyramid, a symbol of death. The obelisk bursts out of the pyramid, creating a visual representation of hope and light transcending death.

Newman stated that when he created the Broken Obelisk, he had no particular location in mind. In total, the sculpture was fabricated four times, three times during the artist’s lifetime, and once after his death. One of the versions is part the permanent collection of the Museum of Modern Art in New York. Another is displayed in the Red Square at Washington University in Seattle. A third version is installed in front of the Rothko Chapel in Houston and is dedicated to the memory of Dr. Martin Luther King. The final version was completed in 2006, and purchased by the Storm King Art Center in New Windsor, New York. In four different contexts, there is potential to give the sculpture new interpretations that might even go beyond the artist’s original intentions.