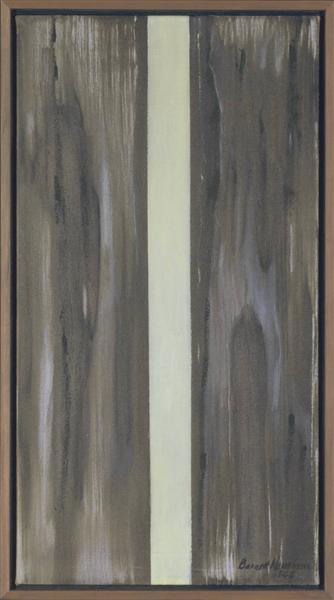 Moment (1946) captures an important point in Barnett Newman’s career and artistic evolution. The artist destroyed most of his artworks from the1930s and the early 1940s in order to set himself on a new creative path. Therefore, it is not surprising that during this period the artist was preoccupied with the biblical theme of Genesis. Particularly, it was the idea of God creating the world out of nothingness that appealed to the artist. Newman strived to create in this manner, to produce out of a void and fight through a primordial sense of chaos. In this case, the theme of Genesis can also extend to the subject of the painting. The title suggests the painting represents the moment of creation. Another possibility is that the title refers to the artwork itself, to the unique moment where all the elements come together to achieve a complete artwork.

This is an early example that demonstrates a significant step in the development of his signature style. Several parallels can be drawn between Moment and Newman’s artistic breakthrough, the painting Onement I (1948). The two paintings share the basic structure of a color field with a vertical line cutting through the center of the canvas. The first significant difference between the paintings is in the treatment of the color field. In Onement I and later paintings, Newman was known for his flat, single tone color fields. This set him apart from other abstract expressionists, such as [url href=Mark Rothko]Mark Rothko[/url] and Clyfford Still, that used more expressive brushstrokes and incorporated several hues into their color fields. In Moment, the artist’s brush strokes are fluid streaks of green and brown tones, which create a wooden like texture. Newman had an affinity toward shades of green and brown. He and other abstract expressionists favored these colors because they believed these were more representative of ‘primitive’ cultures - civilizations that they felt had a more genuine connection to the world.

The second important element in the painting is the vertical streak. In contrast to the color field, the vertical band is painted in a solid light shade of yellow. For Newman, the significance of Onement I was the creation of the zip, the vertical streak that runs down the length of the canvas. Newman felt that the vibrating zip did not divide the canvas, but instead created unity and harmony. Perhaps for this reason, the artist did not consider the vertical in Moment to be as successful. The hard edge and sterility of the vertical band splits the canvas, and it almost serves as a partition. Moment symbolizes an intermediate stage between Newman’s early paintings and his mature style that came about after the painting of Onement I.

In December of 1948, Newman gave Moment to his wife, Annalee Newman, who presented it to the Tate Museum in 1988. Even though the painting was never exhibited during the artist’s lifetime, it was later displayed in major retrospective exhibitions at the New York Museum of Modern Art, the Philadelphia Museum of Modern Art and the Tate Modern.