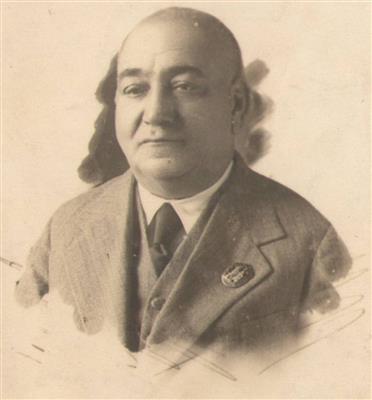 Azim Aslan oglu Azimzade (Azerbaijani: Əzim Aslan oğlu Əzimzadə; 7 May 1880 – 15 June 1943) – was an Azerbaijani artist and cartoonist. He was awarded the honorary title of People's Artist of the Azerbaijan SSR.

Azim Azimzade was born into the family of an oil industry worker at Novxanı village in the Baku Governorate of the Russian Empire (present-day Azerbaijan) in 1880. He received no artistic education and was self-educated. Beginning in 1906, he published paintings concerning social and political issues in magazines. Due to that Azim Azimzade became the founder of Azerbaijani satirical graphics. Azim Azimzade actively participated in revolution, was the manager of culture department of enlightenment of People’s Commissariat of Azerbaijan.

Azimzade’s creativity was multisided. After the revolution he was engaged in book and easel graphics. His heritage consists of easel sheets, book illustrations, paintings from satirical magazines and newspapers, drafts of costumes and decorations, political caricatures and posters. Traditions of realistic satirical graphic of “Molla Nasraddin” magazine and other pre-revolutionary humorous magazines, in which Azimzade actively worked, were successfully used by him for creation of new works of poster arts. Nearly half of all posters of Azimzade were dedicated to anti-religious themes. Patterns of his posters were evoked by real personages, taken from the artist’s modern reality. One of Azimzade’s posters, published in 1925, portrays a peasant with a fork, throwing a plunderer of nation’s property away from village. Azim Azimzade’s posters not only castigated remains of the past, they also portrayed images of positive heroes, too. The artist was mostly interested in the image of hero-man and his psychological characteristics. The first posters of Azim Azimzade were exhibited in Moscow, in 1933, on the exhibition of Azerbaijani artists. They were highly evaluated by central press.

Caricatures took an important place in creative heritage of Azim Azimzade. Development of this genre is closely related to “Molla Nasraddin” magazine. The magazine passed an interesting creative way during its existence period for many years (1906–1931). The first issue of a magazine was released in Tbilisi, in April 1906. Its publisher was a talented writer-publicist Jalil Mammadguluzadeh, who took the Eastern wise man Molla Nasraddin’s name as a pseudonym. “Molla Nasraddin” was the first satiric magazine in whole Muslim East at that time. It was created under the influence of liberation ideas of the first Russian revolution of 1905. After the revolution, from 1922, “Molla Nasraddin” magazine’s edition was renewed. From this period began the productive cooperation of Jalil Mammadguluzadeh with Azim Azimzade. Azim Azimzade became the chief artist of “Molla Nasraddin”. His creativity determined artistic character of the magazine, where his paintings and caricatures took an important place. He could notice subtly and accurately transmitted gestures, motions, poses of his personages.

Azim Azimzade created 56 colored lithographs for collected works of People’s poet M.A.Sabir’s “Hop-hop name”. These paintings revealed ideological essence of the poet’s works, his protest against social unfairness and oppression of workers, against obscurantism. Azimzade also created such bright and expressive series of pictures to stories as “Maybe they’ll return” of Jalil Mammadguluzadeh, “My deer” of A.Hagverdiyev, “Sanctuary” of N.Narimanov, for H.Sarabski’s “Old Balu” book and for other literary works. Azim Azimzade’s illustrations for A.Hagverdiyev’s “Letters from hell” narrative created images of inhabitants of the “hell” – symbolic gathering of negative types.