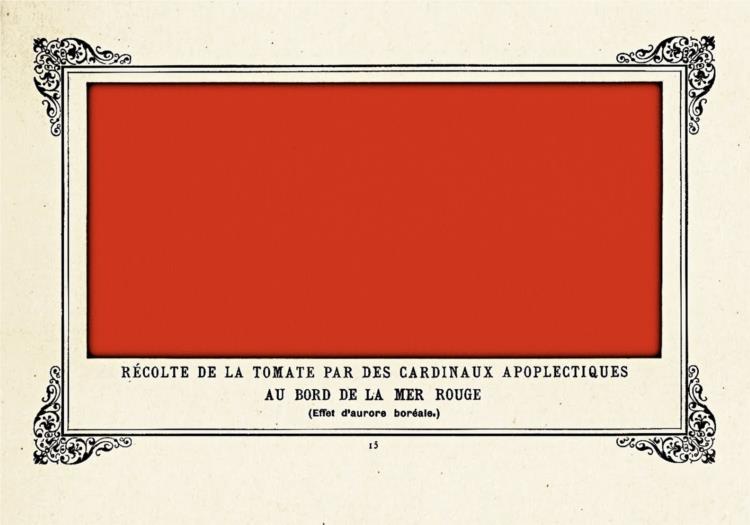 Apoplectic Cardinals Harvesting Tomatoes on the Shore of the Red Sea (Study of the Aurora Borealis), 1884 - Alphonse Allais

The Incoherents (Les Arts incohérents) was a short-lived French art movement founded by Parisian writer and publisher Jules Lévy (1857-1935) in 1882, which in its satirical irreverence anticipated many of the art techniques and attitudes later associated with avant-garde and anti-art.

Lévy coined the phrase les arts incohérents as a play on the common expression les arts décoratifs (i.e. arts &amp; crafts, but above all, a famous art school in Paris, the National School of Decorative Arts). The Incoherents presented work which was deliberately irrational and iconoclastic, "found" art objects, nonsense humoristic sketchs, drawings of children, and drawings "made by people who don't know how to draw." Lévy exhibited an all-black painting by poet Paul Bilhaud called Combat de Nègres dans un Tunnel (Negroes Fight in a Tunnel). The early film animator Émile Cohl contributed photographs which would later be called surreal.

Although small and short-lived, the Incoherents were certainly well-known. The movement sprang from the same Montmartre cabaret culture that spawned the Hydropathes of Émile Goudeau and Alfred Jarry's Ubu Roi. The October 1882 show was attended by two thousand people, including Manet, Renoir, Camille Pissarro, and Richard Wagner. Beginning in 1883 there were annual shows, or masked balls, or both. In an 1883 show, the artist Sapeck (Eugène Bataille) contributed Le rire, an "augmented" Mona Lisa smoking a pipe, that directly prefigures the famous Marcel Duchamp 1919 "appropriation" of the Mona Lisa, L.H.O.O.Q..

The movement wound down in the mid-1890s.

The Incoherent arts were born in the late nineteenth century, a period that was rich in scientific discoveries and social innovations. Cheeky and inventive, this time also marks a turning point in the field of art. The official art traditions were even being questioned in the newspapers through satirical images which implied it was a dying craft. It was in this creative lull that Jules Levy - former member of the literary club Hydropathes - decided to organize "an exhibition of drawings made by people who can not draw." This charitable carnival helped victims of a recent gas explosion to have an opportunity to present their works. The first "Incoherent arts" get-together, which took place on July 13, 1882 on the Champs Elysées hosts many curiosities. Taking advantage of a power outage, and lit only by candlelight, they created a jumble of rebellious works, using all types of materials and any inspiration with the ultimate goal of making people laugh.

On October 2, 1882, Jules Lévy decided to repeat the experience at home. He gathered his friends under the pretense of having an "unusual evening". In his tiny apartment they worked under the phrase "Death to clichés, to us young people!" They received unexpected success and lots of newspaper coverage. As a result, the Incohérents arts movement became engrained into the Parisian cultural landscape. In October 1883 the Paris had its first official exhibition of Incoherent art, ran by local Galerie Vivienne. The purpose was charitable as with all Incoherent exhibits thereafter. A regulation 13-point proclamation was that "All the works are allowed, the serious works and obscene excepted". The exhibition adopts a true catalog, including a piece by Levy Orville in which he reverses an inkwell for the sake of aesthetics. The tone of the exhibition was set by an abundance of parodies and pictorial puns. More than 20,000 visitors took part over a month.