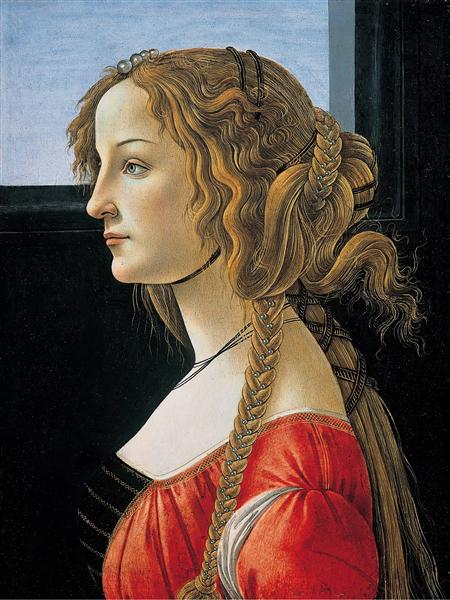 Simonetta Vespucci was an inspiration for several female characters of Sandro Botticelli’s artworks. Viewed as a female ideal, the woman in this portrait has features considered to be perfect at that time. Until the present day, it has been speculated that the portrait of Simonetta is actually just an idealized version of the actual living muse of Florence, transpired into perfection through Botticelli’s mind eye.

The lore says that the maestro was in love with the young beauty, but never quite being able to fulfill this loving desire as she was a married woman. It is said that he painted her image to resemble how perfect she was to him, rather than to show her real beauty. He did not miss a chance to worship her by giving her the roles of high goddesses in his mythological themed paintings. Allegedly, Simonetta’s visage served as main inspiration for Pallas Athena (Pallas and Centaur, c.1482), Flora (Primavera, 1478), and even for the infamous Venus in numerous instances (The birth of Venus, 1485; Venus and Mars, 1483); she also possibly was a prototype for Piero di Cosimo’s Portrait of a Woman (1490).

Botticelli’s portrait of “la bella Simonetta” reveals a specific technique developed in the early Renaissance years. In order to obtain the flawless complexion of the character, the artist uses a special mixture, terre verte - a green, earthy tone - to under paint, and afterward layers the flesh- like tones over it to create diverse shades of pink, yellow, and orange. Botticelli shows brilliant control of the tempera painting technique making use of fine lines and shapes to discreetly build up contrasts and create the depth and texture of the portrait.