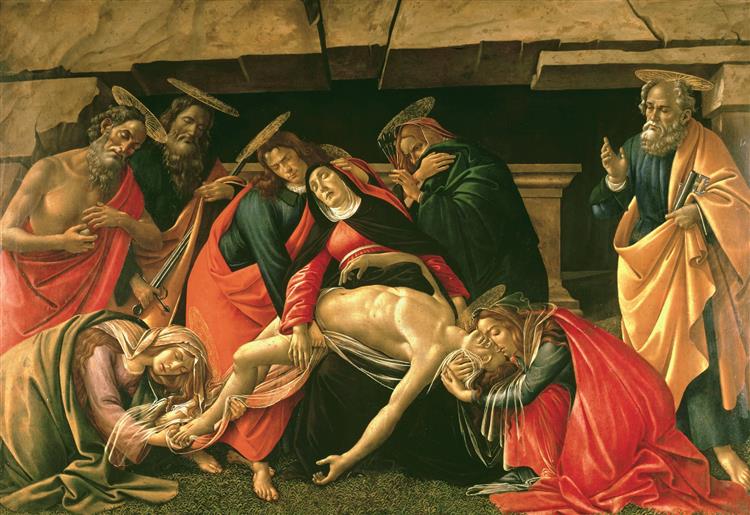 Lamentation over the Dead Christ with the saints Girolamo, Pietro and Paolo

The theme of the Lamentation over the Dead Christ, common in art history since the High Middle Ages, captures a very precise moment, between the Deposition from the Cross and the Deposition in the Sepulcher. It is a very human moment, in which the friends and mother of Jesus weep and cry out all their pain before the body of the Crucifix. it was, also, an interesting subject for artists, who have experienced their ability to represent pain in it.

Botticelli painted this work parallel to another Lamentation (1490) now exposed in the Museum Poldi Pezzoli, Milan. At the moment, the artist was fifty years old.
The painting that is examined here comes from the Florentine church of San Paolino. Botticelli adopted a very widespread artistic style, to incardinate the work to the church that had commissioned it: St. Paul, with the sword, witnesses the scene as if he had been present at the moment of Christ's death. Together with him St. Jerome, dressed as a hermit, who beats his chest with a stone because in the church of St. Paulinus there was a brotherhood of penitents who financially supported the church. On the right St. Peter, a figure often represented together with St. Paul.

Unlike other Lamentations' set near the Cross, in which the sky and the summit of Golgotha ​​is visible, Botticelli sets this in front of the sepulcher: the rocky wall in which it is excavated completely closes the background of the painting, as if to suffocate the space, and to push towards the observer the sound of the silent crying of the people who complain about the body of Jesus. No one screams, in the framework of Botticelli. It is a silent and respectful pain. Christ, naked if not for a transparent cloth that surrounds his hips and back (an extraordinary example of Botticelli's ability in the representation of drapery almost impalpable) is supported by the Madonna, who faints due to the pain in the arms of John the Evangelist. Together with her and the disciple, three women, the three Marie that, on Easter morning, will found the sepulcher empty. Two of them hold Christ’s body: Maria Magdalene blends her head with that of Christ, in a kiss that is the ideal antecedent of Michelangelo's Pietà Bandini (c.1455); another Mary caresses the feet of Christ, with her hands and her hair, a memory of the scene in which the prostituted woman washed Christ's feet with perfume; the third, in the background, suffocates her tears in the mantle, covering her face. We can only see her eyes, very serious and full of pain as they observe the three nails extracted from the Cross, still full of the blood of Jesus.

Botticelli also seems to insert a reason for hope: the rock wall of the sepulcher is not homogeneous, it is already broken by the earthquake which, according to the Gospel story, broke out after the death of Jesus. This detail already heralds the resurrection, together with the soft grass, painted thread by line, in which the group of figures walks. Grass absent inside the cave: a fragile sign of rebirth, in which Botticelli gives us his hope that death is not the last word.

The Lamentation over the Dead Christ, is a painting of the common subject of the Lamentation of Christ by the Italian Renaissance master Sandro Botticelli, finished around 1490–1492. It is now in the Alte Pinakothek, in Munich.


The portrait shows the inert body of Christ surrounded by the Virgin, St. Peter, and Mary Magdalene, St. John the Evangelist, St. Jerome and St. Paul.


The pathetic expressions of the characters were a novelty in Botticelli's art: under the spiritual influence of Savonarola's preachings in Florence, which began around the time the work was executed, he started in fact to abandon the allegoric inspiration that had made him a favourite of the Medici court in favour of more intimate and painstaking religious reflection.