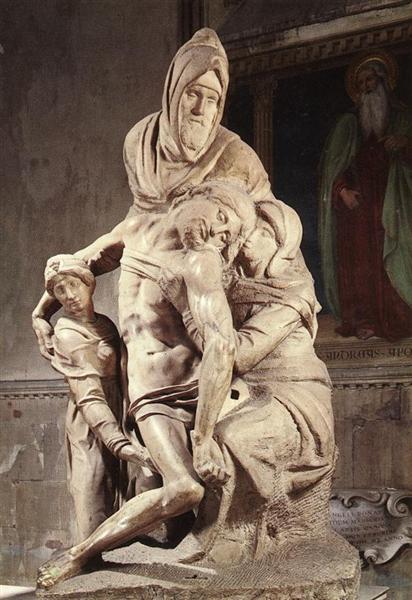 The Deposition (also called the Bandini Pietà or The Lamentation over the Dead Christ) is a marble sculpture by the Italian High Renaissance master Michelangelo. The sculpture, on which Michelangelo worked between 1547 and 1555, depicts four figures: the dead body of Jesus Christ, newly taken down from the Cross, Nicodemus (or possibly Joseph of Arimathea), Mary Magdalene and the Virgin Mary. The sculpture is housed in the Museo dell'Opera del Duomo in Florence and is therefore also known as the Florentine Pietà.


According to Vasari, Michelangelo made the Florence Pietà to decorate his tomb in Santa Maria Maggiore in Rome. He later sold it however, prior to completion of the work after intentionally damaging Christ's left arm and leg and removing several components for reasons still under debate. Some experts believe it was because the marble was flawed and the sculpture could not be completed without the addition of a piece of marble from another block ("piecing").


Vasari noted that Michelangelo began to work on the sculpture around the age of 72. Without commission, Michelangelo worked tirelessly into the night with just a single candle to illuminate his work. Vasari wrote that he began to work on this sculpture to amuse his mind and to keep his body healthy. After 8 years of working on it, Michelangelo would go on and attempt to destroy the work in a fit of frustration. This marked the end of Michelangelo's work on the sculptural group, which found itself in the hands of Francesco Bandini, who hired an apprentice sculptor, by the name of Tiberio Calcagni, to restore the work to its current composition. The left leg of Christ is missing. Since its inception, the sculpture has been plagued by ambiguities and never ending interpretations, with no straightforward answers available.


The face of Nicodemus under the hood is considered to be a self-portrait of Michelangelo himself.


The composition of this work has caused controversy and debate since its creation. Art historians have argued back and forth about what scene or scenes are being presented as well as the true identity of the hooded figure encapsulating the scene. Though it is regarded as a Pietà out of tradition, there is substantial evidence that suggest that this work could either be a deposition, a Pietà, an entombment, or perhaps a scene that depicts all three. The only way to truly know which scenes or scenes are being depicted lies within the identity of the hooded figure.


The identities of other three figures in this work are relatively clear. The body of Christ just after his crucifixion in the middle, being assisted by a distraught Virgin Mary to his left and a cold and distant Mary Magdalene to his right. All three of the known figures are in some way helped by the hooded figure in supporting Christ's body. The hooded figure can be one of two people, or even both. Historians argue that the figure can either be Joseph of Arimathea or Nicodemus, the latter of which is most generally accepted. Conventionally speaking, Joseph of Arimathea is usually shown with a beard and broods over Christ's head, just like the figure in this here. On the other hand, this figure could be Nicodemus who is typically shown with some type of head covering, which would be the hood in this case. Both Joseph and Nicodemus had significant roles in Christ's final days and the subsequent actions after his death. Joseph gave up his own tomb for Christ to use and he helped remove Christ's body from the cross. Nicodemus moreover, had a conversation with Christ about how one could be born again and obtain eternal life. From that conversation on, Nicodemus became involved with Christ and also aided Joseph of Arimathea in Christ's deposition. Since both Joseph and Nicodemus were involved in the deposition, there is a strong argument that that is the scene being shown, so much so that to some, this work is known as The Deposition. Christ's serpentine shaped body sulks heavily in the arms of his loved ones as if he was in the process of descending from the cross straight into his mother's arms. The pained expression on the Virgin's face would resemble the look on her face upon first seeing her dead child with surrounding figures being there to support her.