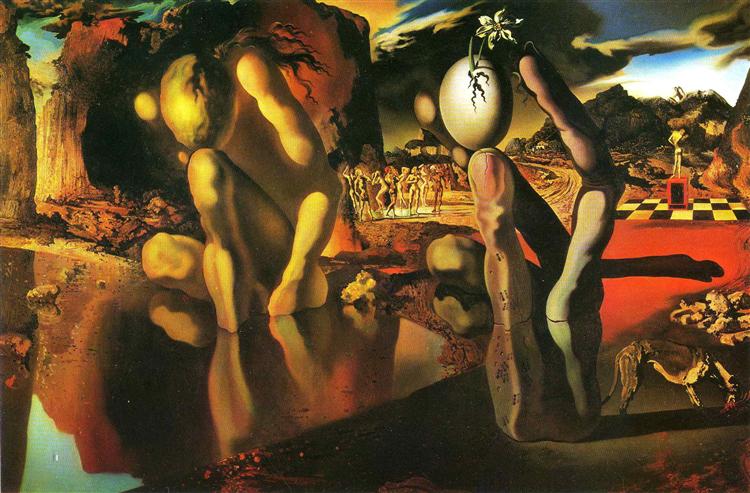 The Metamorphosis of Narcissus

Metamorphosis of Narcissus (1937) by Salvador Dalí is the artist’s interpretation of the Narcissus myth in Ovid’s Metamorphoses. According to the myth, Narcissus was a beautiful youth courted by many suitors, who was too proud to love someone in return. After Narcissus rejected the nymph Echo, the goddess of revenge Nemesis decided to punish him for his vanity. One day Narcissus was bending down to drink when he caught a glimpse of his reflection in the clear pool of water. Overcome by strong feelings of love, he tried to embrace his own reflection and when he couldn’t he fell into despair, beating his chest until he died. In the same place, a beautiful flower bloomed, the narcissus.

Dalí’s interpretation of the myth departs from traditional depictions of Narcissus, such as Caravaggio’s Narcissus (c.1599) and Nicolas Poussin’s Echo and Narcissus (1627-1628). Rather than depicting a single moment, Dalí’s painting highlights the process of transformation. He depicted Narcissus in two modes. On the left, Narcissus is naked in a crouched position, his head is supported by his knee as he looks at his reflection, partially visible in the water. On the right, Narcissus is transformed into an ossified hand holding an egg, out of which a narcissus flower emerges. The motif of the hand holding an egg resembles the assemblage Main Ray (1935) by fellow Surrealist artist Man Ray, which depicts a hand holding a globe. Dalí substituted the globe with the egg, which can be linked to the artist’s interest in alchemy. In alchemy, the egg represents an ideal form that is associated with ‘immaculate conception’. The egg has opposite qualities, its exterior is cold and solid while its inner substance is warm and liquid. In the painting, he alludes to the two qualities of the egg: on the left Narcissus’s head painted in warm yolk tones resembles a chunk of raw material, while on the right it is white, hard and fossilized. The white egg represents purity, and out of this pure form, Narcissus is reborn as a flower.

Dalí began painting Metamorphosis of Narcissus in the spring of 1937, while he was in Zürs, in the Austrian Alps. He also wrote a long poem that accompanied the painting. This was the first painting Dalí made completely in accordance with the paranoiac-critical method, a surrealist technique he developed in the 1930s. The technique required the artist to enter a unique state of mind which he described as a “spontaneous method of irrational knowledge, based on the critical-interpretative association of the phenomena of delirium”. It was particularly effective when creating an optical illusion, of one image hidden within another. In this way, Dalí was able to emphasize the passage of time, and the process of the metamorphosis.

While in London in 1938, the writer Stefan Zweig arranged a meeting between Dalí and the renowned psychoanalyst Sigmund Freud. Dalí, a great admirer of Freud, brought with him Metamorphosis of Narcissus as an example of his work. The following day, Freud wrote to Zweig: “until now I was inclined to regard the Surrealists – who seem to have chosen me as their patron saint – as 100% mad (let’s say 95%, as with alcohol). This young Spaniard, with his ingenuous fanatical eyes and his undeniable technical mastery, has suggested to me a different appreciation. In fact, it would be very interesting to explore analytically the creation of such a painting.”