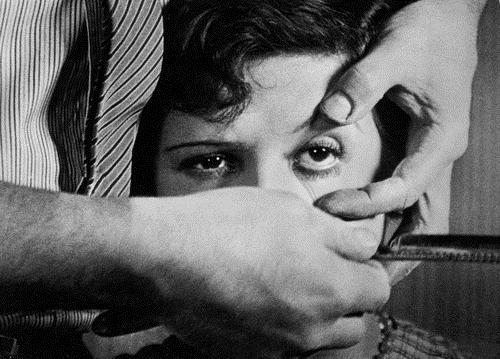 One of the most acclaimed films in cinema history, Un Chien Andalou (An Andalusian Dog) (1929) is a short silent surrealist film by Spanish director Luis Buñuel and artist Salvador Dalí. Following the principles of Surrealism, the film does not have a narrative in the conventional sense. Instead, Dalí and Buñuel decided to string together a series of images that have no logical or rational continuity. Liberated from the demands of narrative structure, the disruptive and disorienting qualities of Un Chien Andalou capture the experience of dreaming on the film screen. The movie retains a sort of structure though, mainly through the recurrence of the same characters. However, the connection between the various events is purposefully ambiguous. Dalí and Buñuel use title cards throughout the film: “Once Upon a Time”, “Eight Years Later”, “Around Three in the Morning” etc. Nevertheless, these do not provide organization or structure, rather they appear random and even confusing.

The opening scene of Un Chien Andalou remains one of the most recognizable images of cinema history. A man played by Buñuel slowly brings a sharp razor and slices the eyes of the heroine. At the precise moment of cutting the eyeball, the film shifts to an image of a cloud slicing across the moon, before immediately after returning to the gruesome image of the sliced eye. In this way, the film builds metaphors and hidden associations between unconnected images: on the one hand a tranquil image of the moon, and on the other hand the violent slicing of the eye.

Dalí and Buñuel wrote the script for Un Chien Andalou in February 1929 during Buñuel’s six-day stay at Dalí’s house in Catalonia. When conceiving the film, the authors were influenced by André Breton’s ideas on Surrealism and Sigmund Freud’s theories on psychoanalysis. Dalí and Buñuel made a strategic choice to premiere the film in Paris, which allowed them to reach a wider audience, one that they believed would be receptive to their ideas. This decision also reflected their belief about the universality of the language of cinema. Additionally, they believed that cinema as a medium has the directness and immediacy that can be particularly effective for representing unconscious processes, dreams, and desires.

Un Chien Andalou premiered in Paris on June 6, 1929, and surpassed the expectations of its authors, who solidified their place in the French surrealist circle led by Breton. Even though the film remains enigmatic, generally it is understood as a work that deals with sexuality. This has prompted many readings of the film and scholars have connected the film to a range of subjects: homosexuality, the sexual transition from adolescence to adulthood, the threat sexual desire poses to male identity, and more.
In 1930, Dalí and Buñuel collaborated on the sequel and wrote together with the script for L'Age d'Or (The Golden Age) (1930). Dalí and Buñuel fell out during the making of the film, but despite that, the film proved a critical and popular success. It also managed to agitate right-wing groups that attacked the cinema where the film was shown.