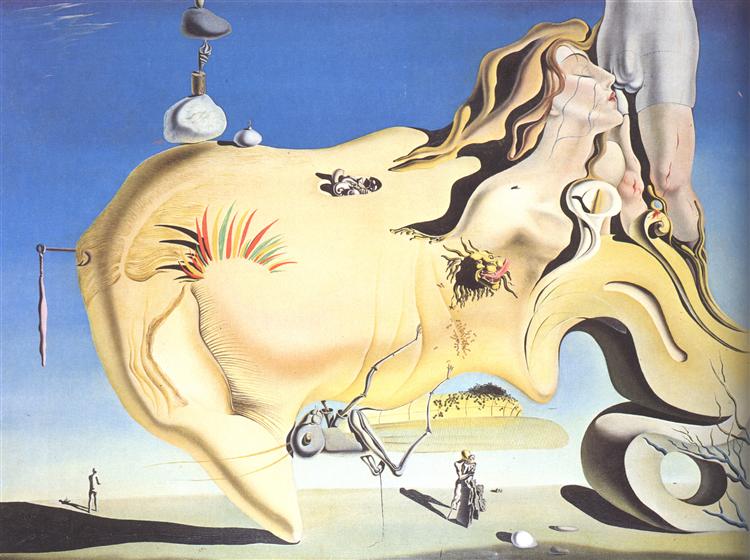 The Great Masturbator (1929) is an autobiographical painting, in which the artist addresses his anxieties, fears, and sexual obsessions. At the center of the painting is a large amorphous form that is a distorted self-portrait of the artist: Dalí depicts himself with his eyes shut and a large grasshopper placed on his mouth. Similar versions of the self-portrait appear in Dalí’s other paintings including the famous masterpiece The Persistence of Memory (1931). According to Dalí, he based the self-portrait on a rock formation in Cap de Creus, located along the shore of his homeland, Catalonia. Some scholars have also drawn a parallel between the self-portrait and a section of Hieronymus Bosch's The Garden of Earthly Delights (1510-1515) – on the right side of the left panel Bosch depicts rocks, bushes, and small animals that resemble the profile with the prominent nose and long eyelashes.

The artist casts himself as “the great masturbator”, and his hidden desire manifests itself through the female figure that emerges from the nape of his neck. She is identified as Gala Éluard, Dalí’s muse, and future wife. Her head and mouth are next to the crotch of a standing male figure, that is only visible from the waist down and cut off at the knees. Dalí painted The Great Masturbator in the later summer of 1929, at the early stages of his relationship with Gala, who at the time was still married to his friend and colleague, the Surrealist poet Paul Éluard. The painting expressed the artist’s anxieties about their relationship, both regarding the circumstances of their romance and his fear of being taken advantage of or swallowed up by Gala. Gala’s presence is ambiguous, she is both loved and feared. She represents the artist’s fear of castration and female sexuality, but also the potential to achieve spiritual and sexual liberation through this relationship.

The most threatening element of the painting is the grasshopper, which relates to Dalí’s childhood fear of insects. Dalí often wrote poems that accompanied his paintings, and in the poem for The Great Masturbator, he referred to the insect as a locust. For Dalí, the fear of the grasshopper or the locust related to the idea of being swallowed up or consumed, which is likely why the grasshopper clings to the lower part of the face, in place of the mouth. According to one interpretation, the grasshopper serves as another representation of Gala. This claim is supported by another painting from the period, Portrait of Paul Éluard (1929). He began the portrait while Gala was still with Éluard, but by the time he finished, she had left Éluard. The portrait shares several elements with The Great Masturbator: the roaring lion, the profile portrait of Dalí, and most importantly the grasshopper. The grasshopper likely implies Gala’s presence, and in a similar way, it signifies Dalí’s anxieties regarding adultery and the implications of their relationship.

The Great Masturbator remained in the artist’s personal collection. After his death, the painting was willed to the national collection of Spain, and today it is part of the Museo Reina Sofía collection in Madrid.

The Great Masturbator (1929) is a painting by Salvador Dalí executed during the surrealist epoch, and is currently displayed at Museo Nacional Centro de Arte Reina Sofía, Madrid.


The center of the painting has a distorted human face in profile looking downwards, based on the shape of a natural rock formation at Cap de Creus along the sea-shore of Catalonia. A similar profile is seen in Dalí's more famous painting of two years later, The Persistence of Memory. A nude female figure (resembling Dalí's then new muse, Gala) rises from the back of the head; this may be the masturbatory fantasy suggested by the title. The woman's mouth is near a thinly clad male crotch, a suggestion that fellatio may take place. The male figure seen only from the waist down has bleeding fresh cuts on his knees. Below the central profile head, on its mouth, is a grasshopper, an insect Dali referred to several times in his writings. A swarm of ants (a popular motif representing sexual anxiety in Dalí's work) gather on the grasshopper's abdomen, as well as on the prone face. In the landscape below, three other figures are arranged, along with an egg (commonly used as a symbol of fertility) and sparse other features. Two of the characters in the landscape are arranged in such a way as to cast a long single shadow, while the other character is seen hurriedly walking into the distance on the peripheries of the canvas. On the back of the central head figure, a formation of two rocks and a potted dry plant can be seen, the pot of the plant placed over the bottom rock while balancing the other rock on top of it in an unrealistic way. This part is thought to represent the escape-of-reality idea found in many of Dalí's other artworks.


The painting may represent Dalí's severely conflicted attitudes towards sexual intercourse. In Dalí's youth, his father had left out a book with explicit photos of people suffering from advanced untreated venereal diseases to "educate" the boy. The photos of grotesquely damaged diseased genitalia fascinated and horrified young Dalí, and he continued to associate sex with putrefaction and decay into his adulthood.


Dalí kept the painting in his personal collection, displayed at the Dalí Theatre and Museum in Figueres, willing it to the national collection of Spain upon his death, when it was removed to the Madrid museum.