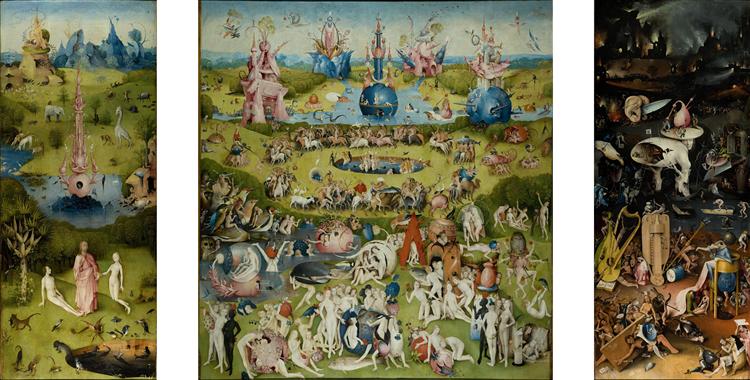 The Garden of Earthly Delights

By far the best known and most ambitious work, The Garden of Earthly Delights illustrates Bosch’s individual artistic style, containing the most vivid imagery and complexity of symbolic meaning. The triptych is generally thought to be a warning of the dangers of giving in to temptation, but has been subject to vast amounts of conjecture and scrutiny, and critics and historians are split in two directions. Whereas some believe that the middle panel, which depicts a fantastical world of nudes in sexual engagement, large fruits, and other suggestive elements, is simply an illustration of paradise lost, others believe that it is a moral warning, which will lead you to hell, as it is depicted in the third panel of the series. Although there are many contradictory explanations, it is generally thought to be a warning against lust, one of the seven deadly sins.

The Garden of Earthly Delights is the modern title given to a triptych oil painting on oak panel painted by the Early Netherlandish master Hieronymus Bosch, housed in the Museo del Prado in Madrid since 1939. It dates from between 1490 and 1510, when Bosch was between 40 and 60 years old.

As so little is known of Bosch's life or intentions, interpretations of his intent have ranged from an admonition of worldly fleshy indulgence, to a dire warning on the perils of life's temptations, to an evocation of ultimate sexual joy. The intricacy of its symbolism, particularly that of the central panel, has led to a wide range of scholarly interpretations over the centuries. Twentieth-century art historians are divided as to whether the triptych's central panel is a moral warning or a panorama of paradise lost. Peter S. Beagle describes it as an "erotic derangement that turns us all into voyeurs, a place filled with the intoxicating air of perfect liberty".

Bosch painted three large triptychs (the others are The Last Judgment of c. 1482 and The Haywain Triptych of c. 1516) that can be read from left to right and in which each panel was essential to the meaning of the whole. Each of these three works presents distinct yet linked themes addressing history and faith. Triptychs from this period were generally intended to be read sequentially, the left and right panels often portraying Eden and the Last Judgment respectively, while the main subject was contained in the center piece. It is not known whether "The Garden" was intended as an altarpiece, but the general view is that the extreme subject matter of the inner center and right panels make it unlikely that it was intended to function in a church or monastery, but was instead commissioned by a lay patron.

When the triptych's wings are closed, the design of the outer panels becomes visible. Rendered in a green–gray grisaille, these panels lack colour, probably because most Netherlandish triptychs were thus painted, but possibly indicating that the painting reflects a time before the creation of the sun and moon, which were formed, according to Christian theology, to "give light to the earth". It was common for the outer panels of Netherlandish altarpieces to be in grisaille, such that their blandness highlighted the splendid colour inside.

The outer panels are generally thought to depict the creation of the world, showing greenery beginning to clothe the still-pristine Earth. God, wearing a crown similar to a papal tiara (a common convention in Netherlandish painting), is visible as a tiny figure at the upper left. Bosch shows God as the father sitting with a Bible on his lap, creating the Earth in a passive manner by divine fiat. Above him is inscribed a quote from Psalm 33 reading "Ipse dixit, et facta sunt: ipse mandāvit, et creāta sunt"—For he spake and it was done; he commanded, and it stood fast. The Earth is encapsulated in a transparent sphere recalling the traditional depiction of the created world as a crystal sphere held by God or Christ. It hangs suspended in the cosmos, which is shown as an impermeable darkness, whose only other inhabitant is God himself.