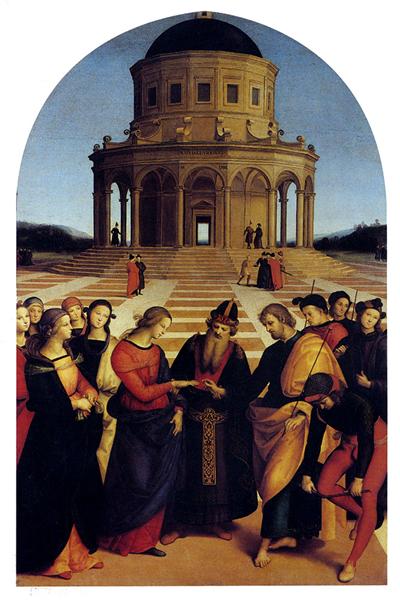 The Marriage of the Virgin

Raphael completed this painting in 1504 for the Citta de Castello, a Franciscan Church. The image, as the name implies, illustrates the wedding between Mary and Joseph. Instead of a biblical scene, the story depicted by Raphael is only a legend. According to the legend, Mary had so many suitors that the High Priest developed a test to see who was the worthiest to wed the woman. Every available man was given a dry rod to place on altar in front of Mary. Whereas none of the other rods flowered, Joseph’s did, and he was able to obtain her hand in marriage.

The Marriage of the Virgin, also known as Lo Sposalizio, is an oil painting by the Italian High Renaissance artist Raphael. Completed in 1504 for the Franciscan church of San Francesco, Città di Castello, the painting depicts a marriage ceremony between Mary and Joseph. It changed hands several times before settling in 1806 at the Pinacoteca di Brera.

In the later years of the 15th century, patrons in Citta di Castello sent three commissions to Raphael's teacher Pietro Perugino which, in Perugino's absence, were completed by Raphael. The Marriage of the Virgin was the last of these. Evidently inspired by one of Perugino's paintings, also known as Marriage of the Virgin, Raphael completed his own work, according to the date placed next to his signature, in 1504. There have been several historians who have disputed that Perugino's painting preceded Raphael's and some who have suggested the painting was not Perugino's at all but instead produced after Raphael's by one of Perugino's followers, but 16th century documentary evidence supports the conclusion that Perugino had begun working on the painting in 1499, though it was not completed until some point after December 26, 1503.

This particular piece was commissioned by one Filippo degli Albezzini to hang in a church dedicated to Saint Francis. It remained in its original home until General Giuseppe Lechi led forces to Città di Castello to liberate it from Austrian occupation, when the painting was gifted to (or perhaps demanded by) the general. "Restoring Raphael" in the Cambridge Companion to Raphael (2005) reports that the painting remained with Lechi to his death in 1804, but Lechi died in 1836. The Cyclopedia of Painters and Paintings states rather that Lechi sold the piece in 1801 to one Giacomo Sannazaro, who himself sold the piece in 1804 to the Ospedale Maggiore in Milan. By whatever means it arrived there, it was in the possession of the hospital for a short time, as in 1806 the hospital sold it to the Italian state for 53,000 francs. It has since then been displayed in the Pinacoteca di Brera, in spite of an 1859 proposal to donate the image to France after that country's army had entered Milan.

Through these various relocations, the painting was damaged. The panel had several cracks in the upper half, while there was rippling and bowing throughout. Italian artist Giuseppe Molteni, retained to repair it in November 1857, chose to preserve the panel rather than transfer the painting to canvas and spent months flattening the panel and hydrating it to overcome the damage of desiccation. This decision on the part of Molteni has permitted 20th-century art historians to use infrared reflectography to study the underdrawing beneath the completed art work. Molteni also undertook to clean the surface of the painting, which had been subjected to restoration before. He did not clean aggressively, as he wanted to be sure that elements of the original painting were preserved. The Cyclopedia of Painters and Paintings indicates that the painting is "somewhat discoloured."