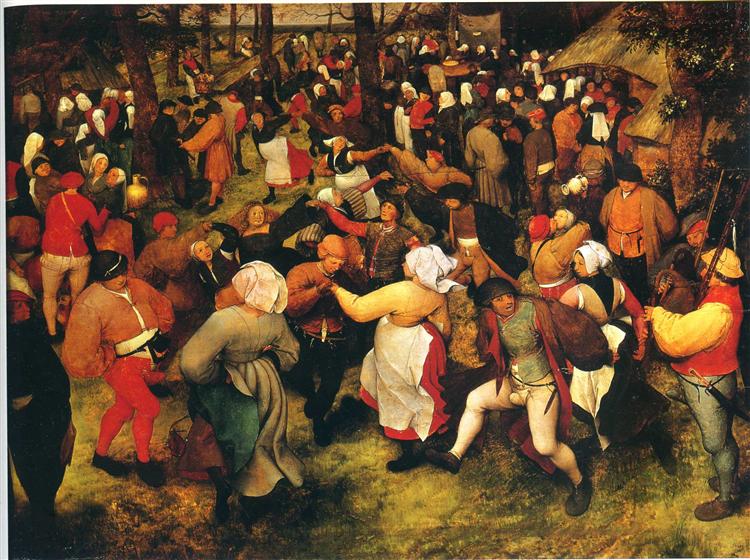 The Wedding Dance in the open air

The Wedding Dance (sometimes known as The Dance Village) is a 1566 oil-on-panel painting by Pieter Bruegel the Elder. Owned by the museum of the Detroit Institute of Arts in Detroit, Michigan, the work was discovered by its director in England in 1930, and brought to Detroit. It is believed to be one of a set of three Bruegel works from around the same time, The Wedding Dance, The Peasant Wedding (1567) and The Peasant Dance (1569).

The painting depicts 125 wedding guests. As was customary in the Renaissance period, the brides wore black and men wore codpieces. Voyeurism is depicted throughout the entire art work; dancing was disapproved of by the authorities and the church, and the painting can be seen as both a critique and comic depiction of a stereotypical oversexed, overindulgent, peasant class of the times.

Pieter Bruegel the Elder completed The Wedding Dance in 1566. It is believed to have been lost for many years, until discovered at a sale in London in 1930 by William R. Valentiner, the director of the Museum Detroit Institute of Arts at the time. Valentiner paid $35,075 for The Wedding Dance through a city appropriation. It is still owned by the museum.

The Peasant Wedding (1567) and The Peasant Dance (1569) are also by Bruegel which share the same wedding theme and elements and were painted in the same period in Bruegel's later years. They are considered to be a trilogy of works by Bruegel. In all three of the paintings, there are pipers playing the pijpzak (bagpipes), they also exude pride and vanity, for example in The Peasant Dance the man seated next to the pijpzak player is wearing a peacock feather in his hat.

Robert L. Bonn, an author, described these trilogy of works as "superb examples" of anthropological paintings, and states that "in three genre paintings Bruegel stands in marked contrast both to painters of his day and many others who followed." Thomas Craven summarises The Wedding Dance as "One of several celebrations of the joys of gluttony painted by Brueghel with bursting vitality". Walter S. Gibson, an art historian, also views the paintings as a "sermon condemning gluttony" and "an allegory of the Church abandoned by Christ."

The popular painting shows a group of 125 wedding guests wearing clothing from the times, presented in the canvas in an apparently chaotic way in an outdoor party surrounded by trees. The brides wore black as it was the Renaissance period and the men wore codpieces, which were an important part of their clothing at the time. Voyeurism (spying on people engaged in intimate behaviours) is shown throughout the entire work amongst almost all of the people.

Each guest's positioning in the painting has its own meaning. In the foreground there is a dancer wearing the colours of that time period and there are many peasants in that area. In the middle there is the bride dancing with an older man, her father. On the right of the work, there is a musician playing on a pijpzak, who is watching the dance from the side. Judging by the writing utensils hanging on his belt, he is a writer or possibly a middle-class painter. Behind him is a hanging tablecloth decorated with a crown and beneath it is the bride's table. Before her table, money collectors can be seen digging trenches while the wedding guests sit down and eat.