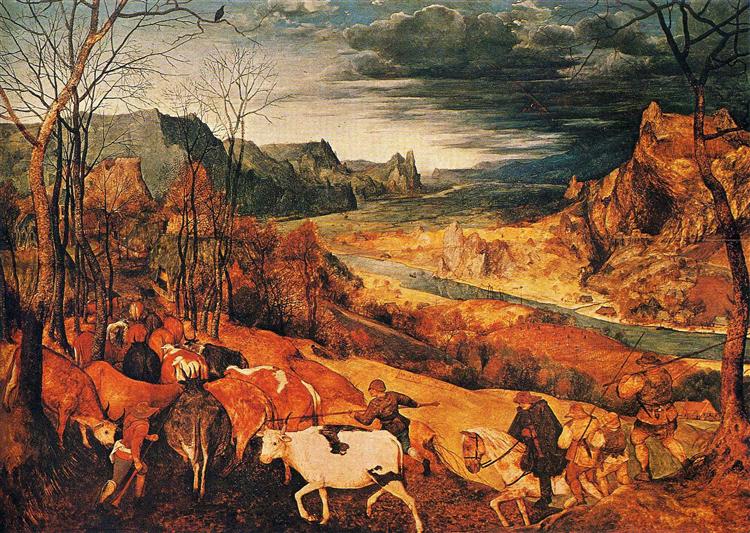 The Return of the Herd (November)

The Return of the Herd is one of a cycle depicting the months, five paintings of which have survived. This picture presumably depicts November.

Many of Bruegel's paintings show people not so much as the masters of nature but rather as a part of it: there is hardly any difference here between the coloration of the cattle and that of their drovers.

November is the month in which the cattle return to their winter quarters from the summer pastures and Bruegel shows them being driven towards the hill-top village. In this panel Bruegel's remarkable technique can be studied at its best. Individual forms are built up with the greatest economy. Within the sketched outline the paint is laid on thinly, sometimes with an almost dry brush. The light brown gesso underpainting is allowed to show through, in this instance giving a warm brown tone to the whole foreground. Bruegel must have composed the Months largely on the panels themselves; only one preparatory drawing on paper survives, a study for one of the hunters in The Hunters in the Snow, the January panel. Having prepared the panel, Bruegel drew the outlines of the composition in paint with a thin brush and then added the thinly-scraped areas of colour within those outlines.

The Return of the Herd is an oil on wood painting by Pieter Bruegel in 1565. The painting is one in a series of six works, five of which are still intact, that depict different times of the year. The painting is currently in the collection of the Kunsthistorisches Museum, located in Vienna, Austria. The autumnal colors of the landscape connect this particular painting to October/November.