{{selectedLanguage.Name}}
Sign In Sign out
Action History
×
Home/ Artists / Northern Renaissance .../ Pieter Bruegel the Elder/ The Massacre of the Innocents 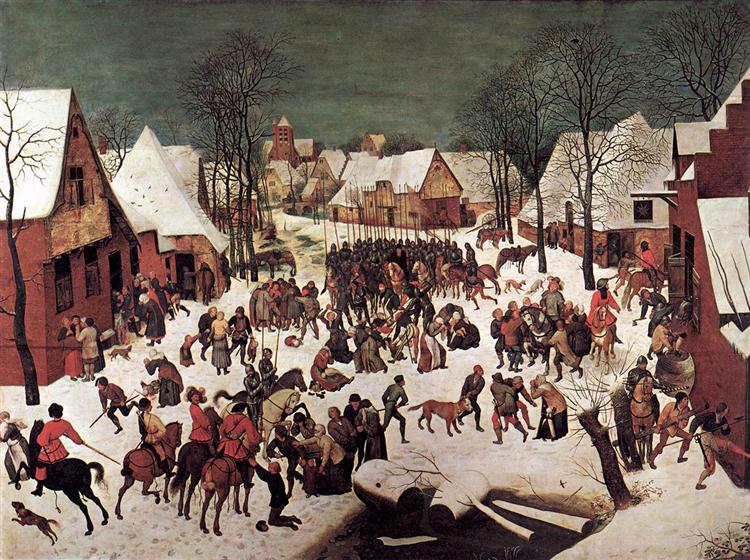 The Massacre of the Innocents

Several oil-on-oak-panel versions of The Massacre of the Innocents were painted by 16th-century Netherlandish painters Pieter Bruegel the Elder and his son Pieter Brueghel the Younger. The work translates the Biblical account of the Massacre of the Innocents into a winter scene in the Netherlands in the prelude to the Dutch Revolt against Spanish rule, also known as the Eighty Years' War.

What is now thought to be the only version by Bruegel the Elder (c.1565-67) is in the British Royal Collection; for some time held at Hampton Court Palace, by 2017 it was at Windsor Castle. Many versions are attributed to Pieter Breughel the Younger, with different art historians listing as many as 7 or 14 versions, including leading examples in the Kunsthistorisches Museum in Vienna, in the Royal Museums of Fine Arts of Belgium in Brussels, and in the National Museum of Art of Romania in Bucharest. Pieter Breughel the Younger also painted his own different composition of the Massacre of the Innocents: one example is held by the Royal Museums of Fine Arts of Belgium.

The painting depicts an event described in the Gospel of Saint Matthew 2:16-18 in the New Testament of the Bible: after King Herod was told by the Magi of the birth of Jesus in Bethlehem, he ordered his soldiers to kill all of the infant children in Bethlehem below the age of 2 years. (In the Biblical account, an angel warned Jesus's family, and they escaped to Egypt.) The Massacre of the Innocents is commemorated on 28 December in the Catholic, Lutheran and Anglican church calendars, as the fourth day of Christmastide.

Bruegel translated the scene to a 16th-century Netherlandish village, where the Flemish villagers are attacked by Spanish soldiers and German mercenaries, possibly as a commentary on the behaviour of occupying Spanish troops in the prelude to the Dutch Revolt against Spanish rule, also known as the Eighty Years' War. The very severe winter of 1564-5 may have inspired the snow-covered scene, with icicles hanging from the eaves and a pond covered with a thick layer of ice: the deep winter also inspired his 1565 painting The Hunters in the Snow.

The version by Bruegel the Elder in the Royal Collection was acquired by Holy Roman Emperor, Rudolph II, and was in Prague by about 1600. He disliked the graphic scene, which depicted many infants being slaughtered by soldiers carrying his own imperial heraldry of the double-headed eagle, and had the children painted over with details – small objects including food and animals – so that it became a scene of plunder not a massacre of babies. The later overpainting became apparent during conservation work in 1998, and Lorne Campbell identified the painting in the Royal Collection as the original version by Bruegel the Elder. This version was probably one of many paintings from the imperial collection looted from Prague Castle by a Swedish army in 1648, at the end of the Thirty Years' War: it was in the collection of Queen Christina by 1652, and came into the British Royal Collection when it was acquired by Charles II in exile at Breda in 1660. It is signed "BRVEGEL" 1565-67, and measures 102 × 155 centimetres (40 × 61 in).