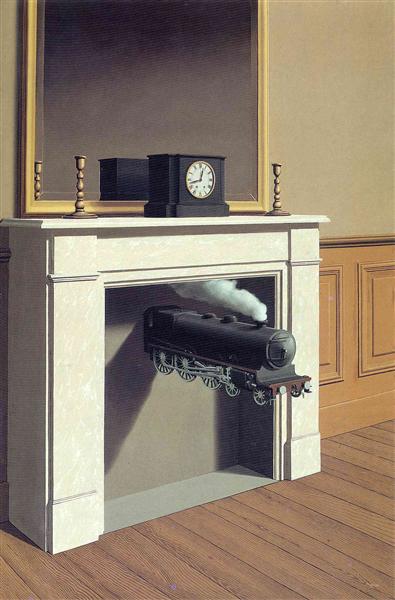 There were two methods that distinguished Surrealist painting style. Artists such as Salvador Dalí, Yves Tanguy, and René Magritte painted in a hyper-realistic style in which objects were depicted in crisp detail and with the illusion of three-dimensionality, emphasizing their dream-like quality. The color in these works was often either saturated (Dalí) or monochromatic (Tanguy), both choices conveying a dream state.

Several Surrealists also relied heavily on automatic writing as a way to tap into the unconscious mind. André Breton defined Surrealism as "psychic automatism in its pure state, by which one proposes to express - verbally, employing the written word, or in any other manner - the actual functioning of thought." What Breton is proposing is that artists bypass reason and rationality by accessing their unconscious. In practice, these techniques became known as automatism, which allowed artists to forgo conscious thought and embrace chance when creating art. Artists such as Joan Miró and Max Ernst used various techniques to create unlikely and often outlandish imagery including collage, doodling, frottage, decalcomania, and grattage. Artists such as Jean Arp also created collages as stand-alone works.

Hyperrealism and automatism were not mutually exclusive. Miro, for example, often used both methods in one work. In either case, however, the subject matter was arrived at or depicted, it was always bizarre - meant to disturb and baffle.

Surrealist imagery is probably the most recognizable element of the style, yet it is also the most elusive to categorize and define. Each artist relied on his own recurring motifs arisen through his dreams or/and unconscious mind. At its basic, the imagery is outlandish, perplexing, and even uncanny, as it is meant to jolt the viewer out of their comforting assumptions. Nature, however, is the most frequent imagery: Max Ernst was obsessed with birds and had a bird alter ego, Salvador Dalí's works often include ants or eggs, and Joan Miró relied strongly on vague biomorphic imagery.

Surrealist sculpture perfectly enhanced Surrealism's radical provocations by forcing people to encounter physical objects that represented taboo or repressed issues floating just beneath our common surfaces. Rather than simply viewing a painting that might express one artist's buried madness or embarrassing fantasy, viewers were now invited to interact with the unreal made real and touch a fantastical embodiment of repressed desire.

Two major veins of work defined surrealist sculpture: the biomorph and the objet trouvé - giving two-sided insight into the way the imagination works when attempting to materialize the pure unconscious. In the former, we find abstracted shapes and forms created through organic, emotional associations. In the latter, we find compositions of random items chosen intuitively without strategy or predetermination. Both represent the non-strategic, automatic processes of Surrealism.

A limited number of Surrealists are known for their three-dimensional work. Arp, who began as part of the Dada movement, was known for his biomorphic objects like Human Concretion (1935). Oppenheim's pieces like iconic Object (1936) were bizarre combinations that removed familiar objects from their everyday context, while Giacometti's were more traditional sculptural forms, many of which were human-insect hybrid figures, like Woman with Her Throat Cut (c.1932). Dalí, less known for his 3D work, did produce some interesting installations, particularly, Rainy Taxi (1938), which was an automobile with mannequins and a series of pipes that created "rain" in the car's interior. Dalí's installation, as well as Man Ray's Indestructible Object (1923) are great examples of objet trouvés, or found sculptures, which freed the mind from conscious thought. They might be jumbles of mechanical items, food, dolls, violins, or buttons, often with witty titles.

Photography, because of the ease with which it allowed artists to produce uncanny imagery, occupied a central role in Surrealism. Artists such as Man Ray and Maurice Tabard used the medium to explore automatic writing, using techniques such as double exposure, combination printing, montage, and solarization, the latter of which eschewed the camera altogether. Other photographers used rotation or distortion to render bizarre images.

The Surrealists also appreciated the prosaic photograph removed from its mundane context and seen through the lens of Surrealist sensibility. Vernacular snapshots, police photographs, movie stills, and documentary photographs all were published in Surrealist journals like La Révolution surréaliste and Minotaure, totally disconnected from their original purposes. The Surrealists, for example, were enthusiastic about Eugène Atget's photographs of Paris. Published in 1926 in La Révolution surréaliste at the prompting of his neighbor, Man Ray, Atget's imagery of a quickly vanishing Paris was understood as impulsive visions. Atget's photographs of empty streets and shop windows recalled the Surrealist's own vision of Paris as a "dream capital."

Surrealism was the first artistic movement to experiment with cinema in part because it offered more opportunity than theatre to create the bizarre or the unreal. The first film characterized as Surrealist was the Entr'acte (1924), a 22-minute, silent film, written by Rene Clair and Francis Picabia, and directed by Clair. But, the most famous Surrealist filmmaker was of course Luis Buñuel. Working with Dalí, Buñuel made the classic films Un Chien Andalou (1929) and L'Age d'Or (1930), both of which were characterized by narrative disjunction and their peculiar, sometimes disturbing imagery. In the 1930s Joseph Cornell produced surrealist films in the United States, such as Rose Hobart (1936). Salvador Dalí designed a dream sequence for Alfred Hitchcock's Spellbound (1945).

The work of Sigmund Freud was profoundly influential for Surrealists, particularly his book The Interpretation of Dreams (1899). Freud legitimized the importance of dreams and the unconscious as valid revelations of human emotion and desires; his exposure of the complex and repressed inner worlds of sexuality, desire, and violence provided a theoretical basis for much of Surrealism.